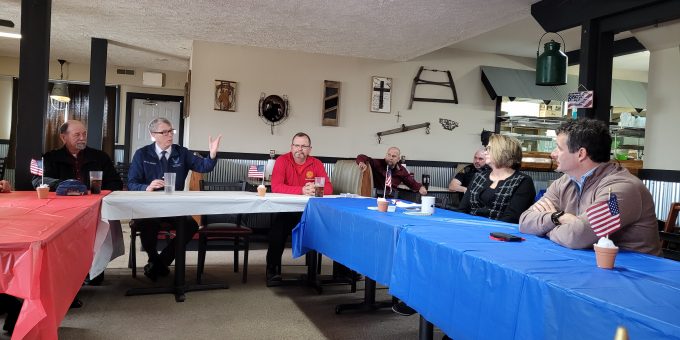 BEDFORD – Congressman Trey Hollingsworth came to Bedford on Monday at Smokin Jim’s Barbecue and Steakhouse to meet in a round table discussion with some of the many veterans in Bedford and Lawrence County.

These veterans were able to have a one-on-one conversation with Hollingsworth on what issues need to be addressed on Capitol Hill in Washington D.C.

Many different issues were presented during the event including easier access to medical services for veterans, the potential of legalizing the use of medicinal marijuana, and better healthcare/health insurance costs for veterans and their families.

For the past few years, veterans have been having difficulty with medical treatments from the Veterans Affairs (VA) Hospital from services to even the ability to get to the building, an issue that many feels could be handled by building a location in Bedford.

Lawrence County Veterans Affairs Officer, Brad Bough, believes the need for better service is a must for every veteran, whether that be a VA Hospital or even allowing those with a VA Medical card to get services at any hospital near them.

“Veterans should be able to walk into any hospital for healthcare services. Some of our veterans don’t have the luxury or ability to travel up to Indianapolis or Louisville to get treatment,” Bough said. “We have two hospitals in Bedford, and the space for a VA Hospital is readily available. These VA cards should be honored like Medicaid, where each veteran can be treated anywhere.

For many veterans and current servicemen and women, Post-traumatic stress disorder (PTSD) has a nasty hold on their everyday lives. For most of them, the treatments offered either don’t work properly, or make things worse than before. One option that has helped most veterans is the use of medicinal marijuana.

The symptoms relax and calm each user, to escape the burden of the mental disorder, that can wreck havoc on an individual at any given moment.

“I have seen the benefits of medicinal marijuana with a friend who has a child dealing with seizures. They have to travel to Colorado to get what she needs to just live a normal life,” said Hollingsworth. “There is a big push at the Stat level for Indiana to include the use of marijuana for medical purposes, though the country as a whole is still dealing with the best course of action for these overwhelming needs.”

Hollingsworth reminded those in attendance that the power of the country is not with the Government, but in the hands of the people.

“Every Government official represents the people, it’s not the other way around. People need to hold the Government accountable, for everything they say,” said Hollingworth. “Even when it comes to healthcare, I want families to be in charge of their healthcare, the Government should not be involved in these decisions.”

Before leaving the event, Hollingsworth closed by saying how important veterans have been to every U.S. Citizen, whether they are related or not.

“I promise that no matter what level of Government I am a part of, I will come back to Bedford and meet with veterans in this round table format every year, no matter what,” Hollingsworth said. “I want to do that because we must represent veterans in a high manner of respect for their bravery. Every one of them signed their name on the dotted line and served to protect the country, (the government) need to do a better job at giving veterans what they need first, before any other entity.”