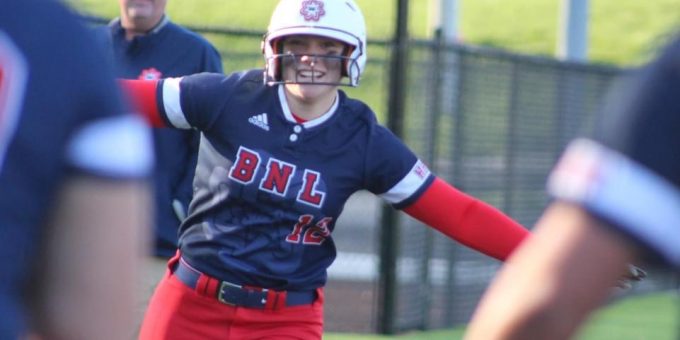 BEDFORD – The message sent was unmistakable, uncoded and thunderous. The path to the Hoosier Hills Conference title and the Class 4A sectional crown runs through Bedford North Lawrence.

Spurred by power and pitching, the No.5 Stars validated their credentials as championship contenders with a sparkling 9-1 victory over rival Floyd Central on Tuesday afternoon. Ava Ratliff and Braxton McCauley slugged home runs, and Annie Waggoner was masterful in the circle as BNL (10-0 overall, 2-0 in the HHC) took a huge step toward the league crown.

BNL exploded for four runs in the first inning and cruised from that point, banging out 12 hits and scoring in every inning but one. The Highlanders could not solve Waggoner (7-0), who allowed only a late solo homer while fanning nine. That’s the kind of complete performance expected from the defending champions.

“This win was big because they have always been a rival of ours, and we knew they were going to come for us after we beat them in the sectional championship last year,” Waggoner said. “For this year‘s sectional, it sent a message that we don’t back down, even if they come out fighting harder than before. We fight harder.”

BNL took the fight to Floyd with the early eruption. Waggoner started the rally with a hard single, Ratliff rifled a double to right, and McCauley followed with a single to left for the first run. With two outs, Aliza Jewell cracked a two-run double to right, and she scored when Maddy Bennett reached on an error.

“The girls came ready to hit and hit it hard,” BNL coach Brad Gilbert said. “It was a great start that set the tone early. And adding on runs was what we needed to do to extend the lead and keep them down.”

Adding on came in smaller, albeit louder, doses. Ratliff crushed a home run to right (her 11th of the season) in the second, Waggoner whacked a RBI double in the fourth, McCauley led off the fifth with a blast to center, and Carlee Kern manufactured another run later that frame. Ratliff capped the scoring with a RBI in the sixth.

”The early lead gave us control of the momentum and a cushion for the rest of the game,” Waggoner said. “In this game, momentum is everything. So for us to shut them down, and then put some runs on the board, was huge.”

The Highlanders got on the board with Taylor Chumbley’s homer in the sixth. Waggoner allowed only four other hits but stranded those runners.

“In the circle I had command of my pitches tonight,” Waggoner said. “And as a team we kept our energy and intensity up the whole time.”

Ratliff was 3 for 4 with 2 RBIs, McCauley was 3 for 3 and drove in two more, and Waggoner totaled two hits.

BNL still has challenges ahead, but this victory was a key one in the HHC race, and it established the Stars as a power for the postseason.

“I’m not sure it says much for the sectional,” Gilbert said. “Our sectional is tough and teams will be getting better. This game was huge for us to stay in the hunt for a conference championship.”

The Stars will continue the league chase on Wednesday, visiting Jeffersonville.