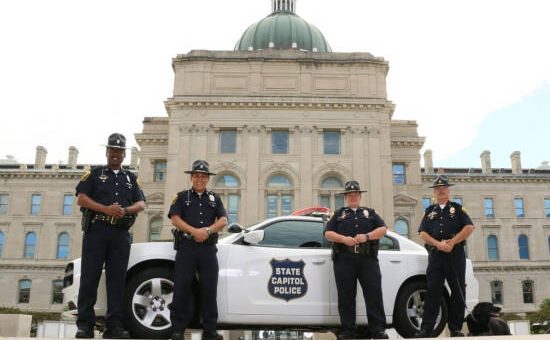 INDIANAPOLIS – The Indiana State Capitol Police has concluded its investigation into the vandalism which occurred inside the Indiana Statehouse on Sunday, March 27, 2022, in which four (4) juveniles were identified as the alleged perpetrators of the incident.

Detective Charles Meneely’s investigation has revealed that at approximately 3:45 p.m., Indiana State Capitol Police Officer Wiley Mimms had entered the Statehouse through the north doors when he heard multiple voices coming from the area of the Rotunda.  As he approached that area and began to communicate to his dispatch via radio, he heard people running towards, and then out of the west door.

While giving chase on foot, Mimms noted the description of the three girls and one boy.  He was eventually able to find them walking along Indiana Avenue just south of Michigan Street where they were detained and later released to responsible adults.

The four, a boy (13 years of age), and three girls (12, 13 and 14 years of age) all from Indianapolis had entered the Statehouse through the west door on the second level at approximately 1:54 p.m.  They damaged the door to the point where they were able to open it and enter the building, which was closed to the public at the time.

Once inside, the juveniles allegedly vandalized the Indiana House of Representatives Chambers on the third floor with graffiti, damaged several electronic items and personal property of other persons at this location.  They threw a wooden bench from the third floor Rotunda railing which shattered on the second floor, vandalized the Statehouse Tour Desk on the second floor, damaged a sculpture at the Statehouse Tour Desk, and tampered with an art display on the second floor.  Additional damaged property included miniature national flags and miniature state flags on display on the desktops of the Indiana State Representatives assigned desk space inside the House Chambers.  Initial estimate of the damage is in excess of $17,000.

During this investigation, the four juveniles were interviewed by Meneely in the presence of their parents.

Detective Meneely has submitted his investigation to the Marion County Prosecutor Juvenile Division for review and to request the following charges:

All persons referred to in this release are presumed innocent until and unless proven guilty in court.  Final charges will be determined by the Marion County Prosecutor Juvenile Division.