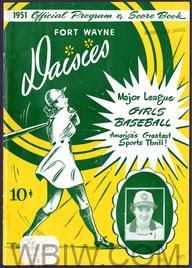 INDIANA – The All-American Girls Professional Baseball League, known as the AAGPBL, was created in 1943. While professional men’s baseball continued during World War II, many of its players – including stars like Joe DiMaggio and Ted Williams – served in the military and were unable to play.

In response, several prominent baseball managers established a separate all-women’s league to both provide novelty and to ensure that sports fans continued to support the game of baseball during the war. Due to wartime gas rationing, most AAGPBL teams were located in the Midwest so they would not have to travel long distances to play each other.

Indiana was home to two teams: the South Bend Blue Sox and the Fort Wayne Daisies. The AAGPBL existed for several years after the war and officially ended in 1954.

This program from the Indiana State Library collection is from the Daisies’ 1951 season and features a picture of Daisies pitcher Pat Scott who played for the team from 1951-1953. A 1947 “Fort Wayne Daisies Year book” can be viewed here.