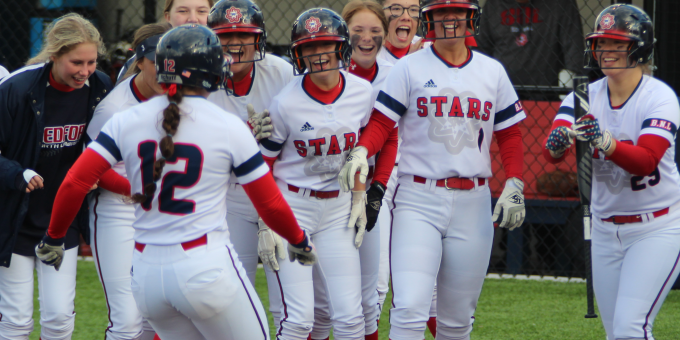 BEDFORD – Will spring ever spring? Will opponents ever stop throwing strikes to Ava Ratliff? The answer to both questions is the same: eventually.

While the promised change of seasons progresses at the pace of an old man shuffling through sand, Ratliff continued her torrid assault and terrorizing pitchers, blasting two home runs while powering Bedford North Lawrence to a brisk five-inning victory over North Harrison.

Ratliff’s two majestic bombs and 6 RBIs propelled the Stars, newly minted as No.5 in the Class 4A poll, to a 11-1 triumph on Monday afternoon. Aliza Jewell sparkled in the circle, and Lauryn Anderson set the table for the offense with three hits. BNL, now 9-0, started a busy week with a shot of confidence as it prepares for a Hoosier Hills Conference showdown with Floyd Central.

Throw Ratliff a pitch in the zone at peril. She crushed a two-run shot in the first, then ripped a grand slam – a drive only the cold wind kept from the parking lot on top of the hill behind left field – in the second. After going hitless in the last outing, Ratliff was back to normal. Maybe it’s not normal for a freshman to club 10 homers and drive in 20 runs in her first nine varsity games. So far, the 0-for-3 in the last BNL win has been atypical.

“You can’t be good all the time, especially when you’re playing a game that sets you up for failure,” Ratliff said, wisdom beyond her years. “I just think about hitting line drives, and if they go, they go. If you try to think about hitting a home run, most likely you will pull your head and strike out. When you try to hit it too hard, you usually miss the ball.

“I just keep it simple. If you overthink it, it becomes a hot mess.”

Simply put: boom. Two swings, and a 7-1 lead. Her first came after Anderson led off with a stroked single to right. The second came after Anderson’s slap-bunt single loaded the bases with two outs, after Annie Waggoner drew a walk for a 3-1 advantage. After looking at two strikes and fouling off three pitches, Ratliff connected. That ball needed clearance from air traffic control.

“The more you try to hit line drives, the more the ball carries,” said BNL coach Brad Gilbert, who gets to practice his high-fives with trotting base runners at third quite often.

“I felt like we hit better,” Gilbert said. “We put pressure on them every inning, and that’s what we have to have, stay consistent and keep scoring runs.

“Lauryn got it started. That’s what we need out of her, getting on base. Hit or error, I don’t care as long as she gets on base and puts pressure on the defense, sets the table for everyone else.”

Jewell (3-0) went four innings in the circle and struck out 6 after giving up an unearned run in the first. Hayley Davis worked the fifth as the two BNL hurlers allowed only four hits.

“Aliza kept it low, kept them off stride,” Gilbert said. “And we played good defense behind her.”

BNL will now battle Floyd Central on Tuesday in a clash for the league lead.

“It will be a great game,” Gilbert said. “Floyd will be ready. We have to relax and play our game.”