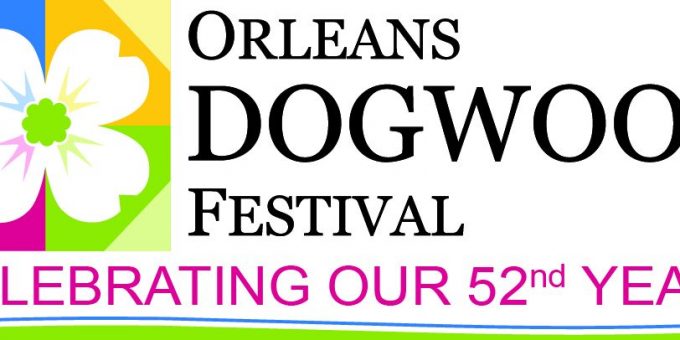 ORLEANS – After a two-year hiatus due to the COVID-19 Pandemic Orleans’ trademark Dogwood Festival returns on April 23 through April 30.  This year will mark the 52nd anniversary of the celebration of the blooming dogwood.

Chamber Executive Director Robert F. Henderson said this year’s general theme is celebrating all things Orleans and the resiliency of the “Hometown Spirit”.

“After so many months of not having much to look forward to we are all more than ready to welcome back our favorite springtime celebration,” he added. “Everyone is so happy and excited to be having the festival again. It means so much to the community he added.

The Orleans Dogwood Festival has once again been named by Midwest Living magazine as one of its “Top Flowering Festivals in the Midwest.”

The Chamber’s Annual Town Wide Yard Sale is set to kick off the festivities this coming Friday and Saturday April 22-23.

Back by popular demand will be the Dogwood Murder Mystery Dinner Theater with its show “Murder at the Art Show.” The dinner show is in partnership with The Orange County Players.  Tickets are still on sale from the Orleans Town Offices for all three performances April 29, April 30 and May 1.  Cost will be $12 per person. Tickets must be purchased in advanced.

Ashley McDonald is once again chairing the now combined Dogwood Pageants. This year both the Little Miss and Queen Crowning will take place this Saturday night at the Orleans Elementary School. As has become tradition the 2022 “Mr. Dogwood” is also expected to be named during the intermission for the queen crowning ceremonies. The pageant will begin at 5 p.m.

The Orleans American Legion will once again provide the midway, Brady’s Amusement, which will set up and operate the entire week as in the past. Advance Sales of Bracelet Tickets are now underway.

The popular Euchre Tourney returns to the festival line up this year after an absence of several years on April 28th.  The event will be held at the old Leipsic School building a new location.

Jennifer Blanton is serving as Parade Chairman this year.  The chamber is still accepting last-minute entries for the event and everyone is being encouraged to participate in this year’s Dogwood Parade. Longtime Orleans Pastor Tom Bostic has been named as the 2022 Grand Marshall and will lead the parade through town on April 30 beginning at 2 p.m.

Live entertainment is planned for the Main Stage during the festival week with Lick Creek Bank, and a Gospel Concert with The Breeding Sisters with Worth the Journey already announced.

The Orleans Dogwood Festival Face Book page is also being updated regularly with new information for 2022.