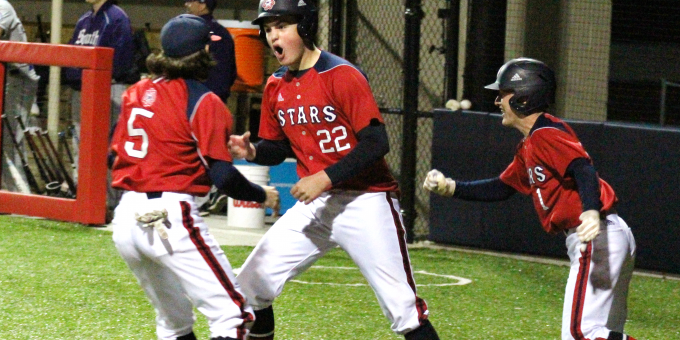 BEDFORD – Somewhere near second base, on a lonely stretch of baseball road, late on a cold night, Walker Ward got buried alive, disappearing under a red avalanche of humanity. A cruel fate? A sad funeral? Oh no, he’s never been happier.

The death was Bloomington South’s, and Ward was the culprit. His clutch RBI double in the bottom of the seventh inning chased home Kaedyn Bennett with the winning run as the Stars arose from certain doom for a thrilling 5-4 victory on Thursday night.

Down 4-0 in the sixth, the Stars rallied during the final two frames for a dramatic walk-off win, highlighted by heroic hits from Grant Dalton, Bennett, and finally Ward, who whacked a deep drive into the left-center field gap, watched as Bennett chugged around the bases to score, then got swarmed in the dogpile celebration. BNL (4-3) won for the third time in the last four games, the second time with a last-swing hit, but none was bigger than this.

”It’s huge,” BNL coach Jeff Callahan said. “That was over a very good team. South is a big rival for us, a team the kids want to beat. I was real proud of the comeback.”

In the seventh, trailing 4-3 with one out, BNL started the rally on a Ryker Hughes sharp single to center. He reached second on a wild pitch, then took third when another A.J. Brinson pitch got loose on the turf. Hughes remained there when Kylar Fisher grounded out to third.

Bennett, on a 2-2 pitch, ripped a single to left to force the 4-4 deadlock. Callahan and his coaching staff discussed a pinch runner, for Bennett is not a blazer on the bases. But when Ward worked a full count, that allowed Bennett to get a head start on the pitch. And that would be huge. Ward tomahawked a high pitch – probably ball four, up and out of the strike zone – into the gap, and Bennett has never ran faster as he rounded third and headed for home. He crossed without threat, setting off the wild celebration.

What a finish. “No free baseball tonight,” Callahan said with a smile. When Ward was finally rescued from the human debris field, rising to a hero’s welcome, the sophomore took it all in stride. He didn’t really have a plan, he admitted, just attack the ball.

“I went up there to help my team and just hit,” Ward said. “Got a little nervous. But it was fun. It means a lot. It was a good win all around, I’m thankful for this team.”

The Panthers scored four times in the fifth to take control, finally breaking through against BNL starter Kline Woodward. With one out, Logan Wright reached on an error, advanced to second on interference, and scored on Brinson’s RBI single. Justin Zaleski followed with a solid single, then was cut down at second when seeking an extra base, but Cooper Webb connected for a RBI single. After two walks loaded the bases, Blaise Oeding flared a soft single to right for two more runs.

“A lot of times, in the past, we don’t win that game,” Callahan said. “But this team, whether they know better or not, they did enough to come back and win. They came through big in the last two innings. We did a lot of good things.”

The rally started innocently enough, with a hit batter and two walks loading the bases. The first run scored on Will Adams’ ground out, and with two outs Dalton crashed a huge double to right, scoring two runs and cutting the deficit to one run. That set the stage for the fireworks in the seventh and the importable conclusion.

“You have to go out with confidence,” Ward said. “Some teams lose hope. I just never lost hope.”

Ward earned the win in relief, pitching the final 2 1/3 innings while striking out five and not allowing a hit. Dalton and Jonny Stone had two hits each for BNL, and Bennett scored twice. He might not be swift, and perhaps his late burst was part fear and part adrenaline, but he was in the middle of everything important.

“We talked about running for him,” Callahan said. “He’s not the fastest in the world. Hey, he scored and that’s all that mattered.”

BNL will have to recover from the emotional explosion in a hurry. The Stars host Edgewood in the annual Coaches vs. Cancer fundraiser game on Friday.