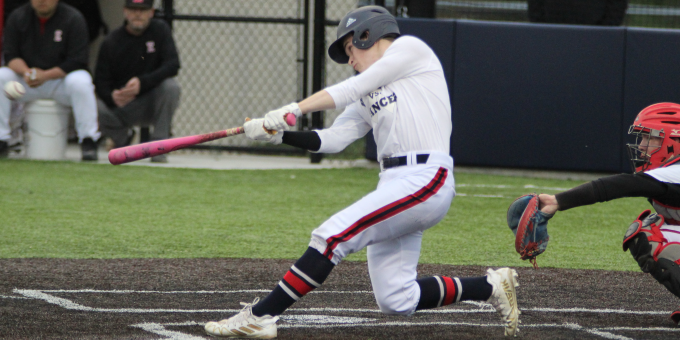 BEDFORD – If only cancer could be conquered with the swiftness and ease of Bedford North Lawrence’s latest triumph. If only the money raised during the annual Coaches vs. Cancer fundraiser could have the immediate impact Maddox Ray had during his first varsity start.

The disease, which strikes without respect of persons and claws into every family, can cast a gloom that matches Friday’s overcast afternoon, but Ray and the Stars were rays of sunshine in the daily battle. BNL stopped Edgewood 9-0 on the field, with Ray making quite a splash, and the program raised $5757 for the Lawrence County Cancer Patient Services. That’s the definition of win-win.

Ray was perfect at the plate, with two hits, three RBIs and a sacrifice bunt, spectacular in the field with a dazzling defensive stop to take away a base hit. Not bad for a sophomore who has waited for the spotlight to find him. Ryker Hughes earned the win, allowing only two hits in five innings and getting relief help from Will Adams for the combined shutout.

But the real story was the work that went into collecting the funds. This eighth annual labor of love has now netted over $40,000 since its debut, which might seem like a drop in the ocean when compared to the mega-millions raised in the worldwide fight against cancer. But this money stays in the community, bringing the battle to a personal level. Every player and coach chose a friend or family member to honor during the game, some of those were in memoriam. Most were parents, grandparents, loved ones who have courageously endured.

Ray’s honoree was Harbor Webb, a darling child and one of the youngest ever nominated for recognition. “I’ve been really close to her for a long time,” Ray said. “It affects every family. Just prayers out to everyone that has it and hope they get through it.”

That’s the mindset behind the annual event. Make it matter. Listen to the stories of the guest speakers who address the team during the week before the game. This year it was Debbie Goen and Shauna Dalton who shared their experiences.

“They told their story,” BNL coach Jeff Callahan said. “We all have those stories of family. We know the feeling, but having someone tell their story is special. It’s something we look forward to and enjoy. A lot people doing a lot of work behind the scenes to raise the money. People in our community give to this cause that goes to our community. We know that money helps people right here.“

So the contest – played with pink wooden bats to raise more awareness for the cancer theme – might be a bit anticlimactic, but not for Ray, who cracked a bases-loaded double in the fourth. Not for Kylar Fisher, who cleared the bases with a sharp single in the first for a 3-0 lead. Not for Hughes, who struck out seven.

Fisher’s hit, followed by Adams getting hit by a pitch with the bases loaded for the second time in the first, gave the Stars a 4-0 advantage, and they added another run in the second when Kline Woodward walked, advanced on a wild pickoff throw and later trotted home on a wild pitch.

The breakout hit was Ray’s. After hits by Woodward and Hughes, with two outs, he rocketed a line drive down the left-field line for an 8-0 lead.

“Coach told me to look for the first pitch up the middle,” Ray said. “And I swung and missed on the first one, but I made contact on the second one. I’ve been waiting for it for a while.”

Adams plated the final run with a bases-loaded walk in the sixth. Hughes and Kaedyn Bennett had two hits each as BNL improved to 5-3 with its fourth win in the last five outings. Ray also had the defensive play of the night, a diving stop at second base to take away what looked like a sure hit. “I was just ready for the ball,” he said. “I’m ready for it to come to me any time. I saw it and just dove, hoped I got it. And I got there.”

“Very proud of him,” Callahan said. “That play was fantastic. I thought it was a hit. Then boom, he made it.

“We have him a chance, and he did some good things. That’s exciting. There’s a kid who waited for his opportunity, and when he got it he took advantage of it. They’ll all get chances, they just need to be patient. We’re eight games into a 28-game season. Be ready when you’re called.”

Isaac Lawson had two of the three hits for the Mustangs.

BNL will return to action on Monday, hosting Seymour.