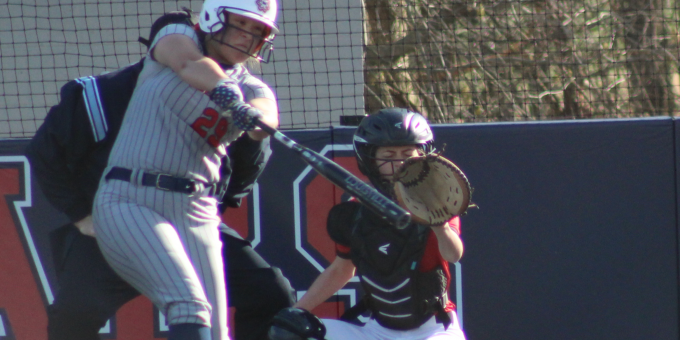 BEDFORD – The bats were muffled, the offense swaddled and silenced. Bedford North Lawrence, a run-scoring juggernaut, had to find a different way to win, rather than just bludgeoning an opponent into the turf. These girls definitely dig the long ball, but there’s more roads to victory than video-game blasts.

The No.8 Stars, with their volcanic attack rumbling but spewing little hot lava, had to dig a little deeper, scratch a little harder, and squeeze out a tense triumph on Thursday afternoon, edging New Albany 3-2 in their Hoosier Hills Conference opener.

Annie Waggoner (now 6-0 in the circle) struck out 11 and scattered seven hits, keeping the Bulldogs (4-3, 0-2 in the HHC) muzzled until her offense finally produced a key go-ahead run in the fifth inning. The Stars (8-0) collected only four hits – far from their normal smash-and-dash attack – against New Albany hurler Cheyenne Palmer, but they took advantage of key miscues to escape.

“We weren’t at our best tonight,” BNL coach Brad Gilbert said. “If we’re not at our best, and win 3-2 against a conference team, we’ll take it. We’ll take five more of them. It is a win. It could have been worse.”

The Stars answered quickly, manufacturing a run and crushing another. Lauryn Anderson led off and reached on an error, scampered to third on a wild pitch and scored on Waggoner’s ground out. With two outs, Braxton McCauley ripped a home run to left center.

But after that, BNL was quiet. Too quiet. The Bulldogs pulled even in the fifth. Vanessa Burns singled to left, raced to second on a wild pitch and scored on Palmer’s sharp single to left. Waggoner gave up a following hit to Kaylee DeMuth but struck out Raymond to end the threat.

In the bottom of the frame, BNL applied pressure and found a weak spot. Carsyn Alvey whacked a single to left, and Maddy Bennett reached on an error. With nobody out, McKaylin Turner was asked to sacrifice, and her bunt was beautiful. Burns, charging from third, attempted to whirl and get a force out at third, but the throw was wide and wild as pinch-runner Kendall Graves bolted home for the 3-2 lead.

That would be enough, as Waggoner fanned four of the final six batters.

“I know what to do in those tough situations, get out of my own head and do what I do best,” Waggoner said.

In addition to the homer by McCauley (her second of the season and BNL’s 18 overall), and the Alvey single, BNL had only hits from Waggoner and Aliza Jewell. Palmer struck out only three but induced nine fly-ball outs.

“We had way too many at-bats that were easy outs,” Gilbert said. “We popped up a lot. And there were times we put pressure on them where we didn’t get a lot out of it. We were on the verge a couple of times. We have to challenge them more. Anybody can catch a fly ball. They were good at that.”

“She’s a competitor,” New Albany coach Brookelyn Visker said of her junior pitcher. “That’s all we asked from her. She did really well, keeping them off balance. We know BNL is a good hitting team, and she had to be on her A game. We made some mistakes (three errors total), and that’s what good teams like BNL do, capitalize on it. They made us pay for it.”

Despite the lackluster offense, BNL took its first step toward the league title.

“It definitely gave us a wake-up call to focus more, to play our game,” Waggoner said.