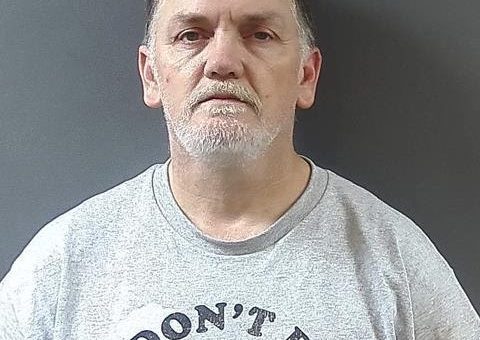 POSEY COUNTY – Friday night, April 9, at approximately 11:22 p.m., an ISP Trooper was patrolling on 4th Street near Barbee Street in Mt. Vernon when he spotted a tan 2003 Ford Explorer that had been reported stolen.

The Trooper activated his emergency lights and attempted to stop the vehicle as the driver was pulling into Casey’s gas station. The driver continued traveling across the parking lot then circled back around and accelerated westbound on 4th Street at a high rate of speed.

The driver of the Ford Explorer turned south onto Sawmill Street and disregarded three stop signs before turning east onto Sycamore Street and then south onto Elm Street which came to a dead end. The driver exited the vehicle and ran south down a rocky embankment into the flooded river bottoms.

The Trooper then chased the driver approximately 150 yards before losing sight of him as he ran down into a large creek. As the Trooper was approaching the creek, he observed the driver lying on the north side of the creek bed and was taken into custody without further incident. The driver was identified as 50-year-old Chadrick Royal, of Evansville.

Royal displayed signs of impairment and failed field sobriety tests but refused to submit to a chemical test. Royal was taken to the Posey County Jail where he is currently being held on bond and charged with resisting Law Enforcement with a vehicle, Level 6 Felony, auto theft, Level 6 Felony, operating a vehicle while intoxicated – refusal, Class A Misdemeanor, reckless driving, Class B  Misdemeanor, and for felony warrants out of Knox and Daviess County.