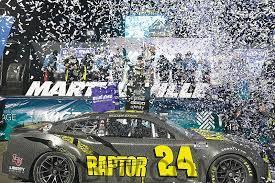 The race extended three laps past its scheduled 400-lap distance due to a green-white-checkered finish. There were four caution periods for a total of 36 laps. Only 19 of the 36 drivers in the race finished on the lead lap.

Byron was able to hold off Joey Logano in a NASCAR overtime finish to become the first driver to earn his second victory of the 2022 season. The win also marks his first multi-win season in the Cup Series and the fourth win of his Cup career.

“It feels awesome,” Byron said to winning at the track where he attended his first race as a fan in 2006. “When that last caution came out, I thought everyone behind us would pit and luckily we stayed out. We were aggressive. We felt like we could re-fire on the tires and be OK, and you’ve got one of the most aggressive guys behind you in Logano. I knew I chattered the tires in (turns) three and four and kind of left the bottom open, but was able to block my exits and get a good drive off.”

The win was an emotional one for Byron for family reasons.

“This one is for my mom,” Byron said. “This same weekend last year she had kind of a mini-stroke and was diagnosed with brain cancer. It means a lot to have her here and it’s been a crazy year. But she’s doing great. And thanks, everybody, for the support. I kind of felt like she was riding in there with me. It’s cool to have her here and I’m definitely going to enjoy this one.”

The 212 laps led for Byron were not only a race and personal high but also helped him set a new mark for laps led in a season at 482.

“We had a great Smithfield Spirals Ford Mustang tonight. It was a challenge at times,’ Almirola said. “The track position game was so tough. I mean, everybody would just start running the same speed after about 30 laps, but our car would take off OK, and then it would just build looser and looser in. I rolled the middle well enough and I launched off the corner well, but I couldn’t quite keep the pace as those guys that were ahead of us. All in all, it was a solid night for us, bouncing back after a couple of finishes that weren’t great, so Drew (Blickensderfer, crew chief) and all the boys have been doing a good job. Hopefully, we can get back on a string of running up front because if we run up front, we’ll have a shot to win.”

Almirola finished sixth in the series’ prior visit to the track last October. He finished fifth in Stage 1 to earn six bonus points and seventh in Stage 2 to earn four more bonus points.

“I wish I could get my qualifying lap back after seeing how crucial track position was,” Brisco said. “That was definitely unfortunate. I wish it would’ve turned out better. We continued to make the car better and I was able to make some passes and was really good in the long run, so we’ll see if we can apply anything when we come back later in the year. Overall, it was great to get another top-10.”

Harvick finished sixth in Stage 1 to earn five bonus points and 10th in Stage 2 to earn another bonus point. Since joining SHR in 2014, Harvick has only one finish outside of the top-20 at Martinsville (33rd in October 2014).

Chase Elliott remains the championship leader after Martinsville with a three-point advantage over second-place Ryan Blaney.

The next event on the NASCAR Cup Series schedule is the Food City Dirt Race on Sunday, April 17 at Bristol (Tenn.) Motor Speedway. The race begins at 7 p.m. EDT with live coverage provided by FOX and SiriusXM NASCAR Radio.