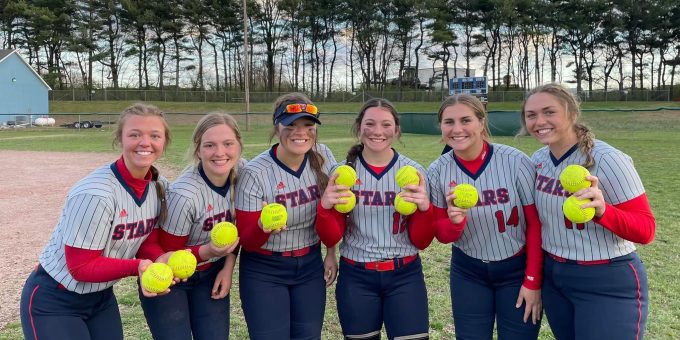 TERRE HAUTE – Neither early rain, nor cold and snow, nor the gray gloom of long road trip could keep Bedford North Lawrence from winning the title during the Terre Haute South Bash on Saturday.

And bash they did. The Stars (7-0) clubbed 11 home runs – by six different players – during the four-game marathon run to the title. BNL powered past Franklin Central 14-4 in five innings in the first game, then clipped Sullivan 6-4 in the second. After crushing Terre Haute North 16-1 (in five innings) in the third game of the day, the Stars capped the championship with a 9-6 triumph over Tecumseh.

The power-factory performance was incredible. Perhaps no ballpark can hold the Stars. With freshman star Ava Ratliff leading the assault with four bombs – pushing her season total to 8 – BNL hammered its way to impressive wins with an explosive offense that is now averaging 8.9 runs per game.

“It was 9-hour day, a lot of games run together,” BNL coach Brad Gilbert said. “We had different people at different times step up. The home runs are great but we had a lot of key hits. I’m really proud of the effort, to play four games in a row. I was afraid of a shut down, but the focus was there the whole day. We had never played four games in a day and playing back-to-back was tough mentally.”

Game 1 vs Franklin Central: In the opener, Maddy Bennett and Ratliff blasted home runs to power the Stars past the Flashes.

After FC’s Brenna Fink led off the second with a homer, the Stars struck for six runs in the bottom of that frame. Bennett’s three-run bomb got BNL’s offense kickstarted, Annie Waggoner later followed with a run-scoring single, and Ratliff ripped her fifth homer of the season to cap the outburst.

The Flashes answered with a two-run homer by Kacey Hickle in the third, but the Stars exploded for five more runs in the third. McKaylin Turner ignited the rally with a RBI single and Ratliff added a two-run double. Waggoner’s RBI single made it 13-3 in the fourth, and Aliza Jewell finished the blowout with a walk-off RBI to trigger the mercy-rule conclusion.

Jewell was 3 for 4, Ratliff had two hits and four RBIs, while Waggoner and Carsyn Alvey all had two hits.

“They’re a solid club,” Gilbert said. “But our kids came off the bus ready to play. We really played well.”

Game 2 vs Sullivan: BNL rumbled to a 5-1 advantage, then held off a late change by the Arrows.

The Stars scored twice in the second to take the lead. Jewell and Kern singled and both scored when McKaylin Turner reached on an error. In the third, BNL scored twice more on singles by Waggoner and Ratliff, Kern’s squeeze bunt and Jewell’s infield hit. Bennett slammed another home run in the fourth.

Sullivan’s Klaire Williams ripped a home run in the sixth, cutting BNL’s margin to 5-3. The Stars scored an important insurance run in the seventh as Waggoner was hit by a pitch, Ratliff singled, Kern walked, and Jewell lofted a sacrifice fly. The Arrows, last year’s Class 2A state runners-up, closed the gap to 6-4 on Alexis Grindstaff’s RBI double in the seventh, but Jewell struck out the final batter.

RatIiff and Jewell both had two hits. Jewell went the distance in the circle, allowing 12 hits but striking out 10 and stranding 11 runners.

“They hit the ball well,” Gilbert said. “They were a scrappy team.”

Game 3 vs Terre Haute North: BNL erupted for five runs in the first and cruised to a five-inning triumph.

The Stars displayed their power once again as Ratliff bombed a 3-run home run in the first, followed by McCauley’s single, Kern’s double and Jewell’s single. Lauryn Anderson led off the second with a bunt single, two steals and trotted home on a error, and Ratliff launched another deep one for a 7-0 lead.

Kern had three hits while Ratliff had two hits and four RBIs. Waggoner earned the win in the circle, striking out 4 and allowing only 1 hit in three innings. Hayley Davis worked the final two frames in relief.

“We came out of the gate hitting, put some pressure on them,” Gilbert said. “We caught them a little flat. When you step on the field, it doesn’t matter. We have to be ready to go. We really played well. It could have been a letdown game but they didn’t.”

Game 4 vs Tecumseh: BNL raced in front, scoring once in the first (McCauley with a sacrifice fly) and five times in the second to take control. Jewell led off the second with a homer to right, Waggoner whacked a three-run blast to center, and Ratliff followed with another bomb to center.

The Braves answered in the third with four runs, as Bri Marx mashed a three-run homer off Waggoner. BNL countered with two more in the fifth on Ratliff’s single and McCauley’s home run for an 8-4 advantage. Tecumseh tallied twice in the sixth on run-scoring hits from Kylee Watts and Karsyn Flowers against Jewell.

McCauley saved a two-run home run with a catch against the fence to end the sixth, then BNL scored a key insurance run in the seventh on Kern’s two-out single that chased home pinch runner Britta Warren.

The Braves collected more hits (11) than the Stars. Jenna Donohoo and Watts had three each. Waggoner (now 5-0 in the circle) and Ratliff (who is now batting a crisp .682 with 14 RBIs and more homers than recorded outs) had two apiece for the Stars.

“Words can‘t express how proud I was,” Gilbert said. “They were focused and ready to go again. We played a very good team. That fast start is something we haven’t done a lot, so I was pleased that we were ready to go with some good swings. We were playing good competition, we knew it wasn’t over. They got close but we always answered. As tired as we were, we always answered.”

BNL will return to action on Monday, hosting Linton.