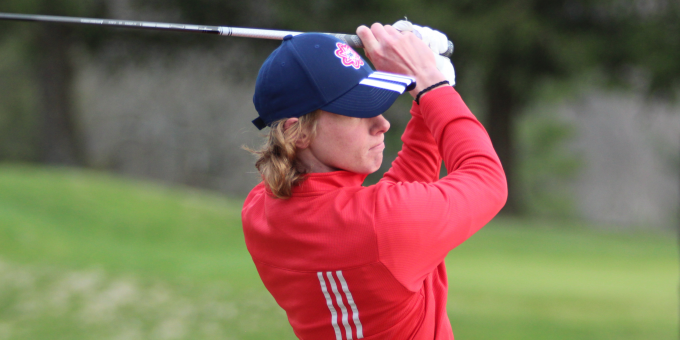 BEDFORD – Perhaps the British – more specifically the Scots, who allegedly invented this wonderful, frustrating sport – enjoy the challenge of golf during the foulest of weather. After all, there are two seasons in Scotland – June and winter.

Otis Park suffered through three seasons during one gray, gloomy, gritty Thursday afternoon: fall, winter and sub-winter. Sun, sideways rain, bone-chilling wind, sometimes within a 10-minute span. If the sunshine promised warmth, it lied. And that makes the score posted by fourth-ranked Bloomington South all the more remarkable.

Battling through British Open conditions, minus the pot bunkers and bad accents, the Panthers fired a team total of 301. Bedford North Lawrence didn’t have anyone break 80 on its home course while totaling 335 during an 18-hole survival test.

The brutality of the long walk certainly identified the mentally tough. That title went to South’s Nick Bellush, who has BNL blood in his veins. He carded four birdies – as many as BNL’s team combined – and stumbled only twice with double-bogeys while carding an even-par 72. Connor Byon posted three birdies and finished with 74. South coach Dustin Carver called it a “grind session.” That would include the grinding and chattering of teeth. If it were hotter, there might have been weeping and gnashing. Most of that was from the gallery, dressed for the Arctic and enduring only because of family obligations.

For the Stars, their scores were closer to wishful temperatures. And before long, when fickle Indiana weather finally turns toward the better, their scorecards will look better.

“We had some crazy weather,” BNL coach Jeff Hein said. “But that’s golf, that’s spring golf in Indiana. You have to play in those conditions. We still have things to work on.”

Trevin Hutchinson paced BNL with an 80 that included one birdie on the par-five 5th hole. With his hat tugged down over his eyes, he plugged away, seeing improvement from his driver but disappointment with his irons.

“My approach shots were off,” he said. “You can’t make birdie putts if you don’t put them on the green.

“I’m used to playing in cold weather like this, and I usually like it. But it did turn into a mental thing once I started doing poorly on the back nine. I know I could have done a lot better. It made me so tired. After I got done, I was OK with shooting 80 today, but I will try not to do that the rest of the season.”

The rest of the Stars had similar results. Colton Staggs (birdie on 13), Ayden Stiles and Dylan Endris (birdie on 5) all carded 85s to complete the team scoring.

“We didn’t putt real well,” Hein said. “We are still searching for someone to be a solid fifth man for us. So it was good to see Dylan in the sixth spot. We still have the competition, it’s still early and there’s a long way to go. I still think we can get better.”

BNL and South are both scheduled to compete at Floyd Central – weather permitting – on Saturday.