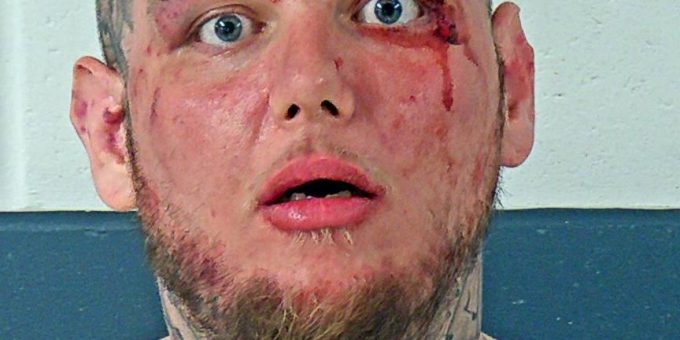 BEDFORD – An Indianapolis man was arrested after a Bedford Police officer saw a man exit Hoosier Pete’s on Mitchell Road waving his hand attempting to get the officer’s attention.

The business owner told police a man came into the business to buy drinks and use the restroom. He then left and entered the business again and asked to use the phone to call for a ride. The owner allowed the male later identified as 28-year-old Jeremiah Lee Johnson to use the phone, however, Johnson did not call anyone and left the business.

Johnson left and reentered the business several times requesting to use the phone. The owner told Johnson he needed to leave or he was going to call the police.

Johnson then told the owner,  “I’m going to rob you, just call the cops”.

The owner then exited the store to call 911 for assistance leaving Johnson inside. This gave Johnson the opportunity to lock the door of the business.

It was at that time the owner spotted a police officer on patrol and flagged him down.

Johnson began yelling, “Nah you ain’t, you ain’t the motherf***ing police bro”. Johnson then made his way behind the checkout counter and into an office area where he closed the door.

The officer drew his TASER weapon and ordered Johnson out of the office.

Johnson exited the office and appeared calm. Instead of exiting the building per the officers request, Johnson pushed a glass display case off of the checkout counter. This caused the display case and the glass merchandise inside to shatter.

Johnson resisted the officer when he tried to detain him.

Once backup officers arrived, Johnson was able to be placed in handcuffs. Officers provided Johnson with medical aid while waiting for the ambulance to arrive. While speaking with the IU Health paramedics, Johnson stated “I’m tired, I’m tired. I’m high”.

Johnson was transported to St. Vincent Dunn Hospital by officers due to his combative behavior. While at the hospital to be treated, Johnson was verbally non-compliant with staff and officers.

The x-ray technician at the hospital had to advise Johnson multiple times on what she needed him to do. Johnson then lunged toward the x-ray technician. Officers once again wrestled with Johnson to get him on the ground to handcuff him. During the efforts to detain Johnson, the x-ray slides as well as the x-ray machine were damaged.

Johnson was then placed in a patrol vehicle and transported to jail.

The owner of the business will provide officers with an estimate of the damage and provide security video footage.