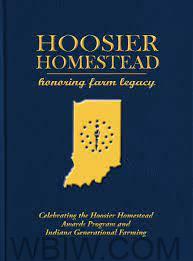 STATEHOUSE – Area legislators today announced the latest recipients of the Hoosier Homestead Award, which recognizes farms that have been owned and maintained by the same family for 100 years or more.

The Hoosier Homestead Award Program honors families who have made significant contributions to Indiana agriculture. The program, instituted in 1976, recognizes the impact these family farms have made on the economic, cultural, and social advancements of Indiana. Within the past 45 years, more than 5,800 farms have received the honor.

“With 96% of Indiana farms being family-owned or operated, it is important we take time to recognize those that have contributed to our local community for more than 100 years,” Koch said. “Congratulations to the Burbrink Family and the Dallas and Hazel Kreinhagen farms for your years of dedication and making it to this milestone.”

“Operating a farm spanning multiple generations and more than 100 years is a tremendous accomplishment,” Lauer said. “This award is well deserved, and I thank the Burbrink and Kreinhagen families for their continued contributions to our state.”

To be named a Hoosier Homestead, farms must be owned by the same family for at least 100 consecutive years and consist of more than 20 acres or produce more than $1,000 of agricultural products per year. The award distinctions are Centennial, Sesquicentennial, and Bicentennial – for 100, 150, and 200 years respectively.