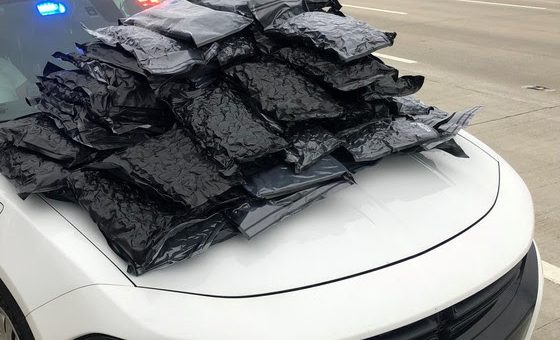 JACKSON CO. -Tuesday afternoon, a traffic stop conducted by a trooper from the Indiana State Police-Versailles Post led to the discovery of a large amount of marijuana and cash which resulted in the driver being arrested on felony charges.

At approximately 5:00 p.m., Sergeant Stephen Wheeles, ISP-Versailles, conducted a traffic stop on a 2022 Ford Edge on I-65 Southbound near the 51-mile marker near Seymour.  During the traffic stop, Sgt. Wheeles became suspicious that criminal activity was taking place.

The investigation led to a search of the vehicle.  During the search, troopers located approximately 60 vacuum-sealed packages containing suspected marijuana.  Initial estimates indicated the weight of the packaged marijuana to be in excess of 70 pounds.  More than $16,000 in US currency was also located in the car.

The driver of the vehicle, Arman Hakobyan, 37, of Chatsworth, California was arrested and transported to the Jackson County Jail on initial charges of dealing in more than 10 pounds of marijuana and possession of marijuana.

Hakobyan will soon face an initial appearance in the Jackson County Circuit Court.