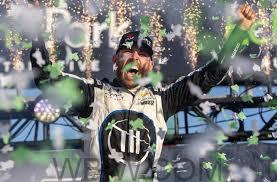 AUSTIN, TX. –  Ross Chastain bumped and banged his way around the final overtime lap at Circuit of the Americas on Sunday for his first career Cup win and upstart NASCAR team Trackhouse Racing’s first trip to victory lane. His margin over second-place Alex Bowman was 1.331 seconds. Chastain is the sixth different race winner in the six races run this season.

Trackhouse is owned by former NASCAR driver Justin Marks and entertainer Pitbull and is in its second season of competition. Chastain, an eighth-generation watermelon farmer from Florida, was kept on by Marks for Trackhouse when Marks bought out Chip Ganassi’s entire NASCAR team ahead of this season.

All but seven of the 39 drivers in the race finished on the lead lap.

Chastain celebrated by spiking a large watermelon off the top of his Chevrolet.

“It’s never tasted sweeter, I tell ya,” the 29-year-old said with a piece of rind stuck in his beard. He then took another huge bite.

The two-lap sprint produced the most aggressive action of a long Sunday of racing on the permanent road course used primarily for Formula One. The race had nine cautions and ran 3 hours, 20 minutes.

Chastain wasn’t even the leader — Tyler Reddick had somehow moved to the front in the previous single lap run between the eighth and ninth cautions — and Chastain also had to contend with former teammate and mentor AJ Allmendinger.

Chastain and Allmendinger restarted second and third while sitting back in fourth was Alex Bowman. He’s been chided for “backing into victories, and for a moment, it looked as if another would indeed fall in his lap.

The overtime featured four lead changes — Chastain and Allmendinger swapped it twice, and Bowman even got to the front — but Chastain decided the race by divebombing inside of Allmendinger. That spun Allmendinger, winner of the Xfinity Series race on Saturday, into Bowman, and Allmendinger went from second to 33rd.

“I was so worried about AJ on that second-to-last restart that I let Tyler drive right by both of us,” Chastain said. “AJ is so good, I’ve learned so much from him, and it’s like ‘How do you beat the guy? He taught me so much!’”

He wasn’t thrilled to have won the race with the dive-bomb on Allmendinger.

“I feel bad about AJ,” Chastain said. “I mean, he’s gonna be upset with me but we raced hard and he owes me one.”

Allmendinger was openly annoyed after a mandatory trip to the care center.

“At the end of the day, we all have to look ourselves in the mirror. If you are OK with it, you’re OK with it. Each person is different,” he said of how Chastain raced him.

“I was doing everything I could do to try to sweep the weekend. We were that close. We know we had a shot to win the race.”

Chastain — and Trackhouse — have been fiercely competitive since the start of the season as its drivers have been terrific in NASCAR’s new Next Gen racecar. Daniel Suarez, who spent all of last season as Trackhouse’s only driver, dominated early and led every lap of the first stage before a blown tire destroyed his race on the second lap of the second stage.

Chastain then took over.

He’s been fast and led laps this year and was close to a win at both Las Vegas and Atlanta. On the Austin road course, Chastain led four times for a race-high 31 laps.

His win was his first in 121 career Cup starts.

Bowman finished second for Hendrick Motorsports and a Chevrolet sweep. Christopher Bell was third for Toyota and followed by Chase Elliott of Hendrick, the defending race winner. Reddick was fifth and pole-sitter Ryan Blaney was the highest-finishing Ford driver in sixth.

Chase Briscoe was a contender Sunday until his race fell apart over the final 12 laps.

“We were able to keep making the car better through the race and at the end there it felt like we had a chance. The 1 (Ross Chastain) kind of ran me off and I was trying to get back to him and made a mistake and let the 16 (AJ Allmendinger) by. Then I locked the left-front (tire) up on a restart and from there every restart after we were just trying to hold on and we blew the right front (tire) on the last restart. We had another really fast Mahindra Tractors Mustang, which is encouraging. We had the speed and we were able to run up front again. We just need to put it all together. That has been the story all year long. If we can put the whole thing together, we are really tough. That is what we did in Phoenix and we just need to continue doing that,” said  Chase Briscoe, driver of the No. 14 Mahindra Tractors Ford Mustang.

Kevin Harvick (14th with 153 points, 55 out of first), This was Harvick’s fourth finish of 12th or better this year. His season-best finish is sixth, earned March 13 at Phoenix Raceway.

Aric Almirola (8th with 168 points, 40 out of first). His 19th-place finish bettered his previous best result at COTA – 26th. He finished fifth in Stage 2 to earn six bonus points. Almirola is the only NASCAR Cup Series driver to finish on the lead lap in every race this season.

Chase Briscoe (9th with 166 points, 42 out of first). He finished eighth in Stage 1 to earn three bonus points. He led once for two laps – his first laps led at COTA.

Chase Elliott remains the championship leader after COTA with a 13-point advantage over second-place Ryan Blaney.

The next event on the NASCAR Cup Series schedule is the Richmond 400 on Sunday, April 3 at Richmond (Va.) Raceway. The race begins at 3:30 p.m. EDT with live coverage provided by FOX and SiriusXM NASCAR Radio.