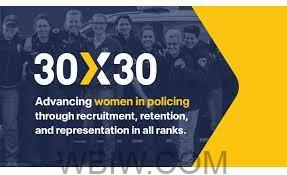 BLOOMINGTON – The Bloomington Police Department and Indiana University Police have signed on to the 30×30 Pledge – a series of low- and no-cost actions policing agencies can take to improve the representation and experiences of women in law enforcement.

Also signing the pledge in Indiana is the Noblesville Police Department.

More than 145 agencies – from major metro departments including the New York City Police Department, to mid-sized, rural, university, and state policing agencies – have signed the 30×30 Pledge.

Currently, women make up only 12 % of sworn officers and 3% of police leadership in the U.S.

Bloomington Police Officer Taylor Jurgeto graduated from IU with a bachelor’s degree in criminal justice and minors in Spanish, sociology, and counseling psychology. She’s been a police officer at BPD since 2019, currently working on night shift patrol and as a field training officer for new recruits. Her career goal is to work as a detective at BPD, specializing in sex crimes and crimes against children.

Lees replaced Laury Flint who served as a patrol officer for 20 years and then as a uniform sergeant, uniform lieutenant, deputy chief of police. In November 2013, she became the first woman appointed to lead the IU Police Department Bloomington, which now has 45 full-time officers.

The activities help police agencies assess the current state of a department with regard to gender equity, identify factors that may be driving any disparities, and develop and implement strategies and solutions to eliminate barriers and advance women in policing. These actions address recruitment, assessment, hiring, retention, promotion, and agency culture.

The Pledge is the foundational effort of the 30×30 Initiative – a coalition of police leaders, researchers, and professional organizations who have joined together to advance the representation and experiences of women in all ranks of policing across the United States.

The 30×30 Initiative is affiliated with the Policing Project at NYU School of Law and the National Association of Women Law Enforcement Executives (NAWLEE).

The ultimate goal of the 30×30 Initiative is to reach 30 percent of women in police recruit classes by 2030 and to ensure policing agencies are truly representative of the jurisdiction the agency serves.

While 30×30 is focused on advancing women in policing, these principles are applicable to all demographic diversity, not just gender.

In signing onto the 30×30 pledge, policing agencies agree to report on their efforts to identify and address the obstacles that women officers face in recruitment and throughout their careers.

The 30×30 pledge is a flexible framework that encourages agencies to share their stumbling blocks while also celebrating their victories. A key goal of the progress reports is to help foster knowledge sharing throughout the 30×30 network and beyond. From these reports, participating agencies will share promising practices, learn from one another, and develop programs and initiatives to address barriers to women’s advancement.