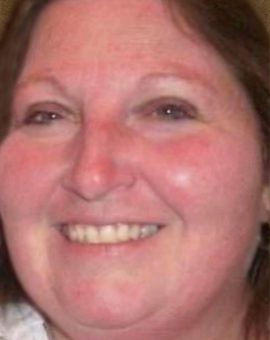 She was born November 11, 1956, to Walter “Bus” Briscoe and Jetta Briscoe. She was proudly a part of the class of 1974 of Mitchell High School where many friends preceded her in death. Susan was an avid reader of true crime, cooked delicious food, and prided herself on being the Queen of useless trivia. She will be missed and is dearly loved.

She is survived by three daughters, Hilliary (Robert) Lee of Orleans, Erica (Anthony) Lewis of Bloomington, and Brittany Hughett of Campbellsburg. The father of her youngest daughter, Brian Hughett also survives and remained a friend. She is also survived by 7 grandchildren; Shawn Lee, Kaylea Hughett, Madelyn Chastain, Johnny Lee, Everleigh Chastain, Maxwell Lewis, and Dale Chastain Jr. Her sister, Gale Acton of Seymour also survive her and her beloved Cousin who she saw as a sister; Keli Prather of Mitchell.

She was preceded in death by her parents, father of two daughters; Hilliard King, her brother David Fortner, and many beloved family members.