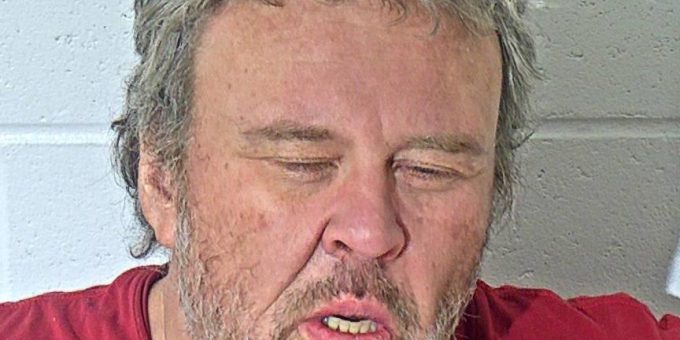 MITCHELL – A Mitchell man was arrested Sunday when Lawrence County Sheriff’s Department deputies responded to the 3370 block of Bono Road after a report of a protective order violation.

While en route to the home dispatch informed the deputy that there was a valid protective order filed against 43-year-old Benjamin Haines.

When officers arrived they were greeted by a male who reported Haines was hiding somewhere on his back porch. Officers went to the back porch and began searching for Haines. While searching officers noticed a broken, wooden screen door at the end of the porch. While continuing to search, an officer entered a room off the back porch of the residence. The officer called out to Haines multiple times and did not get a response. The officer then noticed a blanket laying on the ground with what looked like something underneath it. The officer lifted the blanket and found Haines laying on the floor.

Haines was ordered to stand, he complied, and was handcuffed.

Haines told the deputy he was on the property because  “someone” told him that the police had killed his family. The officer told Haines he could not be at the home and he replied “I  know”.

The owner of the home told the deputy he let his dog out around 3:30 a.m. when he noticed his back porch light on and found Haines standing at the screen door of the porch. Haines was attempting to break into the home and had damaged the back door.

The homeowner went back inside and locked his doors and called 911.

Haines was arrested on two counts of residential entry and invasion of policy.