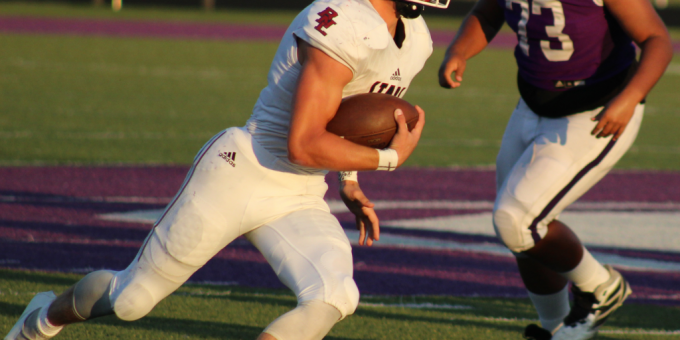 BEDFORD – The football pipeline running from Bedford North Lawrence to Hanover College has not been shut off and might never run dry. BNL’s Brye Lewis kept the flow of talent going when he signed to play for the Panthers.

After earning All-HHC honors as a junior at quarterback, Lewis was switched to linebacker – sacrificing personal statistics for team needs – for BNL last season and thrived at that position, recording 46 tackles and two interceptions. He still wants a shot at playing quarterback at the next level, and he proved those skills are still electric when he stepped back into that role for an emergency start in 2021 and guided the Stars to a road victory over Seymour with 164 rushing yards and two touchdowns, plus 196 passing yards and two more scores.

“I hope to be on the field,” Lewis said. “I hope I can help them out wherever they need me. Nothing has been set in stone.”

No matter where he lines up, nobody plays the game with more passion and intensity.

“It’s just my love for the game,” Lewis said. “It’s how bad I want to be good at football. When people talk about family, I play the game like I’m protecting my family, like they were my brothers.”

Lewis, who plans to major in business, will play for head coach Matthew Theobald, who just finished his sixth season at Hanover.

“It was the way he showed he was interested, he showed a caring personality toward me,” Lewis said. “Then when I visited, it was a good environment. This decision fills you up inside. Makes you feel good.”

Hanover played two seasons last year, competing in the spring of 2021 (when the fall campaign in 2020 was cancelled by virus precautions), then going 5-5 last fall. The Panthers compete in the Heartland Collegiate Athletic Conference.