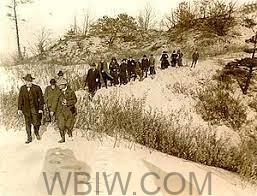 INDIANA – The Rare Books and Manuscripts Division at the Indiana State Library recently responded to a request to digitize documents pertaining to the German immigrant experience for an international project.

The project, the German Migration Research Network, is a collaboration between faculty at Universität Hamburg, University of Missouri-Kansas City, Indiana University-Purdue University, and Macquarie University. The project’s German-language website can be translated using the Google Chrome browser.

One of the State Library’s collections selected for this project is the Richard Lieber papers. Lieber was a German American businessman, later known as “the father of Indiana state parks.” Born in Dusseldorf, Germany, he moved to Indianapolis in 1891. He worked with President Roosevelt to promote conservation efforts in the United States and later brought those efforts to Indiana. McCormick’s Creek and Turkey Run State Park opened in December of 1916. He worked as Conservation Commission chairman until the early 1930s.

The above image is a letter from Wabash College issuing an honorary degree of Doctor of Science to Lieber in 1938. This image is the first page from a program for a performance at Socialer Turnverein in Indianapolis in 1897. When sufficient metadata has been completed, the Lieber papers will be uploaded to the Indiana State Library’s Digital Collections.