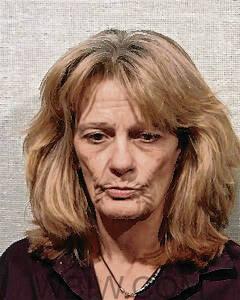 BROWNSTOWN — A woman was arrested after police say she set fire to her duplex less than a day after she had been evicted.

Bonnie Sue Davidson, 52, was booked into the Jackson County Jail in Brownstown on a Level 5 felony charge of arson at 12:39 p.m. Tuesday. She is being held without bond pending her initial court appearance in Jackson Circuit Court.

The fire was reported at 10:02 a.m. at the duplex at 107 North High Street in Brownstown. The duplex is owned by John and Melissa Sears of Bedford, according to property tax records.

According to Brownstown Fire Chief Travis McElfresh when firefighters arrived they found the duplex engulfed in fires. Flames were coming out on both sides of the building. The north unit of the duplex where Davidson resided was destroyed. Firefighters were able to save the south unit.

According to Jackson Superior Court I records, Davidson was evicted from that residence during a hearing Monday afternoon. She also was ordered to pay back rent and utility bills.

Officers with the Jackson County Sheriff’s Department and the Indiana State Fire Marshal Office assisted with the investigation and arrest of Davidson.