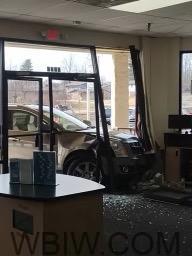 BEDFORD – Bedford Police officers were investigating a crash that occurred at the UPS Store on 16th Street at 10:37 a.m. Friday morning.

The driver of a brown Cadillac SRX, later identified as 72-year-old Linda Raab of Bedford, was driving in the parking lot by Burger King as she began to park her vehicle in front of the UPS store.

Raab suddenly hit the curb and began to drive onto the sidewalk. She then attempted to stop her vehicle, but accidentally pressed on the accelerator and crashed into the storefront according to the police report.

An employee of the UPS Store, Greg Tears, was standing near the front area of the store when he was hit by a part of the window frame that fell on his leg and was treated at the scene with minor injuries.

Raab was treated at the scene and released without further incident.

The UPS Store has been reopened for regular business and is awaiting repairs.