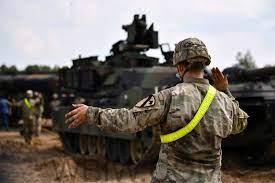 BEDFORD – Lawrence County Veterans Service Officer Brad Bough said his office “stands ready” to support local families of armed service members who are have been deployed to Poland and the surrounding area to defend NATO allies against aggression by Russia.

“I am sure there are families locally that have loved ones who have been deployed,” said Bough. “My office is here to support those men and women and their families. We are ready to help in any way we can.”

Bough says they just need to contact his office at 812- 275-6411 or stop by his office in the lower level of the Lawrence County Courthouse.

“Nobody will forgive. Nobody will forget,” President Volodymyr Zelenskyy vowed after the bloodshed on the square in Kharkiv.” Kharkiv is a city northeast of Ukrain.

Bough has visited to Kyiv, the capital and most populous city of Ukraine. It is in north-central Ukraine along the Dnieper River.

“I have been to Kyiv several times,” he added. “I hate to see this. To see these people under attack. It hurts more when you have visited a place and been around and can identify with the people.”

Ukrainian authorities said five people were killed in the attack on the TV tower, which is a couple of miles from central Kyiv and a short walk from numerous apartment buildings. A TV control room and power substation were hit, and at least some Ukrainian channels briefly stopped broadcasting, officials said.

Zelenskyy’s office also reported a powerful missile attack on the site of the Babi Yar Holocaust memorial, near the tower.

At the same time, a 40-mile (64-kilometer) convoy of hundreds of Russian tanks and other vehicles advanced slowly on Kyiv, the capital city of nearly 3 million people, in what the West feared was a bid by Russian President Vladimir Putin to topple the government and install a Kremlin-friendly regime.

The invading forces also pressed their assault on other towns and cities, including the strategic ports of Odesa and Mariupol in the south.

Many of the nearly 5,000 troops from the 82nd Airborne Division who arrived in Poland last week are working with Polish forces to set up processing centers for tens of thousands of people, including Americans, who are expected to flee Ukraine.

The Biden administration has repeatedly said U.S. troops will not fight in Ukraine or rescue Americans trapped there by a Russian attack. But U.S. commanders and their counterparts in Poland have been preparing parts of several Polish military facilities and erecting tents for possible evacuees.

So far, American officials said, there have been few, if any, people who have sought to use the facilities. But a nationwide attack on Ukraine could result in one million to five million refugees, with many of them pouring into Poland, Pentagon officials have estimated.