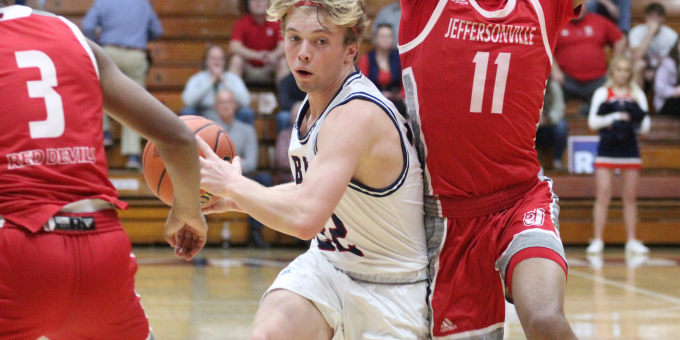 SEYMOUR – When the bright postseason lights flamed on, casting shadows and revealing blemishes that couldn’t be covered, Jeffersonville burned with all the lumens of a defending sectional champion. The Red Devils were the midday sun, outshining all the Stars in a tournament sky.

With the marquee spotlight glaring and the stage demanding a quality performance, the Devils were star worthy, while Bedford North Lawrence was a little star-struck while stumbling to a first-round loss – with no encore possible – in the opening game of the Class 4A sectional at Seymour on Tuesday night.

Forcing turnovers, hitting shots, playing with poise, Jeffersonville proved its regular-season flickering to be a fixable short circuit as the Devils decked the Stars 61-48, advancing to the semifinal to face Seymour on Friday night. Brandon Rayzer-Moore scored 22 points as Jeffersonville (8-11) conquered BNL for the fourth straight time in the series and for the fourth consecutive time in tournament competition.

For a team with so many problems and issues for most of the campaign, the Devils sure convalesced rapidly. In the short time since the two-point, last-second win over BNL at Johnson Arena, which gave the Stars an illuminated pathway to victory in the rematch, Jeffersonville looked like team with one of those expensive makeovers. And BNL was just a shadow of itself.

The turning point came early, with the Stars guilty of 11 first-half turnovers, with BNL failing to record a field goal for the final six minutes of the half, with the Devils torching the Scott Gymnasium nets – which they cut down last season and could be making a deposit on once again – by hitting 10 of 15 shots during a blazing run to a 12-point lead. BNL was not built for that type of comeback, and did not. Turn out the lights, the party was over.

“For whatever reason, they looked like the experienced team, we looked like the team that was unsure of ourselves,” BNL coach Jeff Hein said. “We struggled and made uncharacteristic turnovers – maybe due to nerves, maybe due to playing kids that weren’t quite ready for this big event.”

The deer jumped in front of too many fast-moving Jeffersonville vehicles. After hitting three treys for a 9-8 lead after the first quarter, after Kaedyn Bennett opened the second period with another bomb, the Stars went cold, aiding their own demise with the mistakes, and the Devils did a lot of damage. Shawn Boyd and Brenton Moore buried back-to-back jumpers, Rayzer-Moore streaked to a transition layup and converted a rebound basket, and Will Lovings-Watts swished a corner 3-pointer for a 31-19 halftime lead.

“I was proud of the defensive intensity,” Jeff coach Andrew Grantz said. “Bedford is not an easy team to speed up. They do a great job of making you play their pace. They did that when we played about a month ago. So we knew we’d have to throw some different traps and things like that.”

BNL (11-12) made a brief surge from a 41-26 deficit (following an intentional foul on Colton Staggs and technical fouls on Rayzer-Moore and the BNL bench). Staggs drilled a 15-footer, Colten Leach waded in for an offensive rebound bucket, and Bennett added another second-chance basket. When Bennett opened the fourth quarter with his fourth trey, the Stars had crept within 41-35. But Rayzer-Moore came back with a 3-point play and a soft lane jumper, and BNL never really threatened again.

“We just dug too big of a hole,” Hein said. “It was too big of a hill against a team that’s very good. You have to give Jeffersonville a lot of credit. They’re a good basketball team.

“When we played them the first time, I had a gut feeling that was our chance. Since then, they’re all back together and they’ve all improved over the last few weeks. You can see them peaking at the right time.”

Bennett paced the Stars with 15 points while Leach (who grabbed a game-high 12 rebounds) and Staggs both finished with 13. On most nights, that might have been enough. But the spotlight fixed on the turnovers.

“There were many turning points,” Hein said. “The big thing we struggled with was we didn’t get enough shot attempts because we turned the ball over every other possession, it seemed like. They took advantage of their athletic ability to create some offense. We can’t simulate that in practice. We couldn’t overcome it. We didn’t execute and we’re going home.”

Rayzer-Moore was smooth and spectacular, adding 5 assists and 7 rebounds to his point total. Lovings-Watts, a Drake recruit who hit the game-winner against BNL on Feb. 10, had 12 points and 11 boards, plus 5 assists.

“They were unselfish,’ Grantz said. “They did their job of finding the open guys. Their zone packs you in and makes you take tough shots. I was proud of our effort, our communication, trust – all those things have gotten better from the last game.“

Jeffersonville will now seek vengeance for a 55-47 loss at Seymour on Dec. 10. Grantz missed that game while dealing with a family illness and Lovings-Watts was sitting while serving a suspension. “That feels like a century ago,” Grantz said.

BNL’s last title also seems that long ago, for the Stars it was a galaxy far, far away in 2001. BNL made it to last year’s sectional final but couldn’t repeat that remarkable run.

“Our kids did a great job and won 11 games this year,” Hein said. “If someone had told me at the beginning of the year we would win 11, I’d say put me in the insane asylum. But we found ways, we had some big wins, these kids grew up a lot. I’m proud of everything they gave.”

Floyd Central 61, Jennings County 54, 2OT – The Highlanders (18-4) rallied from a 13-point deficit at halftime and pulled away in the second overtime with their last 15 points from the foul line.

Brady Moore and Max Tripure totaled 14 points each for Floyd, which edged Jennings in overtime during the regular-season clash.

Freshman guard Carter Kent, who scored 14 points, shot the Panthers (14-9) to a 26-13 lead at intermission. He finished with 14 points while Keegan Manowitz added 10.

Floyd took a 44-41 lead in the first overtime, but Jennings senior Carson McNulty buried a trey with 22 seconds left, and Floyd’s Wesley Celichowski missed a short hook at the buzzer to force the second extra session. Moore gave Floyd another lead with a bucket, then Caleb Washington (who was scoreless until this point) made 10 free throws as the Highlanders advanced to the semifinal.

“The guys had some toughness,” Sturgeon said. “For the record I’d rather be 13 ahead than 13 down. We had to go possession by possession and grind it out, get ourselves back in the game by the fourth quarter.”