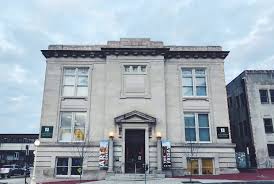 BLOOMINGTON – The City of Bloomington will celebrate the reopening of the John Waldron Arts Center on Friday, March 4 from 5 p.m. until 8 p.m. The event is free and open to the public*.

The celebration will mark the opening of two exhibitions in the Waldron’s Visual Arts Galleries, Reclamation, featuring work by members of Bloomington Open Studios Tours and the Bloomington Photography Club, both long-standing groups who have historically shown work at the Waldron, and Transformation featuring new work by local emerging artists Joii Cooper and Larissa Danielle. Bloomington-based folk-rock band The Barn Cats will also perform in the Waldron Galleries at 5 p.m.

Cardinal Stage’s newly commissioned play The Mountaintop will also be performed at 7:30 p.m. in the Waldron Auditorium. The Mountaintop is scheduled to run from Thursday, March 3 through Sunday, March 20. The show marks the first performance to take place in the Waldron since its closure in December 2020. Tickets for the March 4 performance, as well as purchases on other days, can be reserved through Cardinal Stage’s P(l)ay What You Will program, which allows individuals to choose the price for their ticket, at cardinalstage.org/tickets/pwyw/.

In addition to arts activities, City of Bloomington Deputy Mayor Don Griffin and Assistant Director for the Arts Holly Warren will share plans for the City’s management of the Waldron at 6 p.m.

“A thriving arts community is essential to our quality of life and our local economy,” said Mayor John Hamilton. “I appreciate the artists, arts organizations, advocates, and City staff who contributed their time and skills to reactivating one of Bloomington’s important art spaces.”

In May of 2021, Mayor Hamilton announced a $515,000 commitment for capital improvements to address deferred maintenance on the facility as part of the Recover Forward initiative to help the community recover from the COVID-19 pandemic.

In keeping with its commitment to making the building once again safe and welcoming, the City upgraded the building’s HVAC system to comply with Actors Equity Association requirements, restored the building’s windows in a historically accurate manner, completed roof repairs, and tuck-pointing on the north and west sides of the building, upgraded all light fixtures to LED, and repaired water damage throughout the building. Currently, the City is working to repair the downspout filtration system to prevent future flooding in the building. The Waldron officially reopened on January 4 of this year (bloomington.in.gov/news/2022/01/04/5066).

*In order to join the celebration, visitors 12 years old and older must provide proof of  COVID-19 vaccination with a name that matches their photo ID or a negative COVID-19 test administered at an official testing site within 7 days.

The ownership of the Waldron reverted to the City of Bloomington in January 2021 following its use by Ivy Tech Community College as classroom, performance, and display space since 2010.

The Waldron’s reopening follows a 21-month closure, during which time the City of Bloomington completed repairs to both stabilize and upgrade the facility.

Repair of the facility follows recommendations made by the community-led Waldron Task Force (bloomington.in.gov/news/2021/05/06/4840).

More than $15 million has been approved to date by the City Council for critical investments. Recover Forward Bloomington includes $9 million from the federal American Rescue Plan Act and $6 million from City reserve funds.