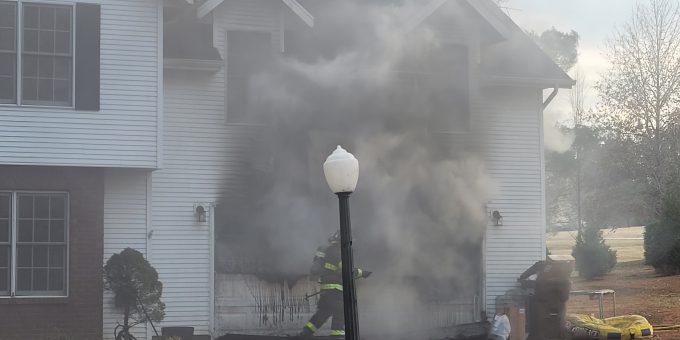 BEDFORD – Marion Township Volunteer Fire Department Chief Paul Gillespie says smoke detectors at a fire at 537 Southridge Drive show how important they are after the detectors alerted a family to a fire in a garage.

Firefighters from Marion Township, and Shawswick, Volunteer Fire Departments responded to the fire at 5:37 p.m.

“While responding dispatch advised this was an attached garage and fire was extending into the residence,” added Chief Gillespie. “Engine 52 arrived on scene and reported a working fire in a 2.5 story wood frame structure with flames from the front and right of the structure in the garage area. Engine 52 deployed the first attack line to the side of the home where flames were coming out of the garage window.”

Huron and Oolitic Volunteer Fire Departments fire were both dispatched for tanker because there are no fire hydrants in the area.

“After a quick hit through the window the walk thru garage door was removed and crews made entry into the garage to attack the main body of fire,” said Chief Gillespie. “As other crews arrived tw0 crews were sent into the residence to check on both floors for extension of fire into the residence. The fire was knocked down in six minutes of the arrival of Engine 52.”

Firefighters encountered high heat and heavy smoke inside the residence but found no other extension of fire inside the home.

“Positive pressure ventilation was used to remove the smoke from the home while waiting on Duke Energy to remove the meter to kill the power to the home,” said Chief Gillespie. “Upon investigation fire is believed to have started on the back wall of the garage and believed to be electrical in nature. The cause remains under investigation at this time.”

The American Red Cross was contacted for the five family members who were displaced from the residence due to the fire.

“This fire shows the importance of smoke detectors,” added Chief Gillespie. “The resident heard the alarm and responded to it quickly. Noticing there was a fire they evacuated and called 911. Many people become upset, understandably, and attempt to combat the fire themselves before making the 911 call. It is important to remember that all firefighters are trained and wear protective gear during a fire to protect them from the heat and smoke that the everyday citizen does not have at their disposal. The smoke was so thick in the home that survival would be highly unlikely within just a few minutes. The quick reaction from the caller to respond to the alarm, realizing it was an actual fire, leaving the home, and calling 911 was textbook on how a homeowner should react in this type of situation. All of the Fire Departments in Lawrence county are trained and equipped for this very reason. The best way for you to help us is to react to the alarm immediately, leave the home, and call 911. Once out of the home, do not return inside for any items until cleared by the firefighters on the scene. The caller did a terrific job letting dispatch know exactly what was happening, when the situation changed, that information was relayed to the responding departments making our decision-making process that much faster on getting resources to the area.”