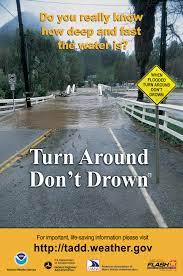 Daviess County Sheriff’s Department deputies responded to the area around 12:30 p.m. Friday. When they arrived they found 41-year-old Melissa Santos of Washington and her passenger 18-year-old Maria Baldwin of Washington standing on the roof of the vehicle.

Knox County crews arrived in a hovercraft and found the 2003 Hummer stranded in some trees. Crews were able to get the women onto the boat, however, the hovercraft became stranded, and a second unit was called to the scene to assist.

Police say it took about 3 hours to get everyone back onto dry land.

Both women were transported to Daviess Community Hospital and treated for hypothermia.

The Daviess County Sheriff’s Department reminds motorists to never drive through floodwater. Authorities say you are not only putting yourself in danger but also the first responders.

Each year, more deaths occur due to flooding than from any other thunderstorm-related hazard. The Centers for Disease Control and Prevention report that over half of all flood-related drownings occur when a vehicle is driven into hazardous flood water.

The next highest percentage of flood-related deaths is due to walking into or near floodwaters. People underestimate the force and power of water. Many of the deaths occur in cars swept downstream.

Many of these drownings are preventable. Never drive around the barriers blocking a flooded road. The road may have collapsed under that water.

It is NEVER safe to drive or walk into floodwaters.