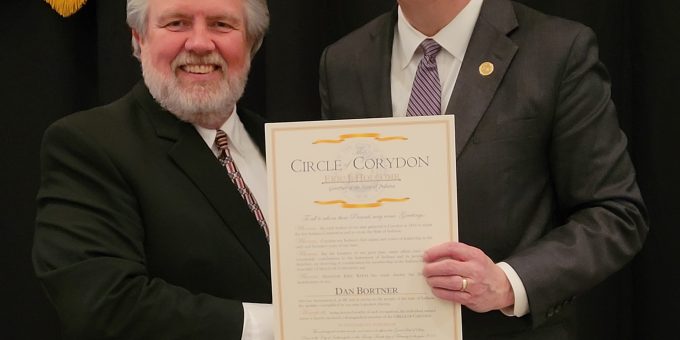 There was a void in the air, as this was the first toast held following the tragic passing of longtime Bedford Mayor John Williams and as a way to honor the late Mayor, the dinner was renamed the John Williams Memorial Toast.

“Being here without John (Williams) is hard and the mark he left on the community will be felt for generations to come. John Williams was Bedford in everything he did,” said Bortner.

The biggest surprise of the evening came from Senator Eric Koch with awarding Dan Bortner the Circle of Corydon Award.

The Circle of Corydon was established in 2017 by Indiana Gov. Eric Holcomb, and it honors Hoosiers who have made remarkable contributions to the betterment of Indiana and its people, demonstrating through life and service qualities exemplified by the state’s greatest citizens.

In the message from Governor Holcomb, the main comment he had about Dan was the love he has for his hometown and the State of Indiana.

“I don’t think I have met anyone more down to earth than Dan. The real hometown pride he displays shines through in every conversation you have with him. His infectious enthusiasm and the passion he displays every day, comes through with his true service above self attitude,” said Governor Holcomb.

Indiana State Parks Director Terry Coleman echoed what the Governor said by reassuring Dan’s ability to put his work and service above his own needs.

“Governor Holcomb recognized something in Dan. The confidence he has in himself builds confidence in others as he builds an atmosphere of success,” said Coleman. “Dan was able to take a good state park system and make it great, to the point that people from other states, come to Indiana to see our parks.”

Dan was able to take a moment at the end to address the crowd on what a humbling experience the evening truly was for him.

“This event is not about me, but instead the students who will be able to get an education and hopefully come back to Bedford and contribute to the community, It truly is humbling to be the honoree. This is like a dunk tank, if you are doing it for a good cause it makes it worthwhile.”

Bortner ended his speech by making one final comment about his hometown and the place he continues to love by saying “No place feels like this, it just feels right.”