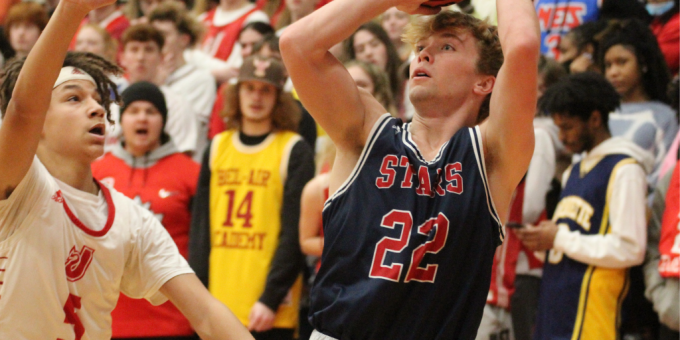 BEDFORD – The question is simple: Who wants it the most?

After all the June scrimmages and camps, after the preseason conditioning, after 16 weeks of regular-season practices, after 22 games, after sacrificing blood, sweat, bruises and even a few body parts, which team is ready to peak at the perfect time and cut down nets while celebrating a sectional championships? Ready to keep grinding, or ready to hang it up?

Forget the records, the statistics, the previous meetings and the predictions. The most telling factor in postseason basketball boils down to sheer will. Refusing to lose and face the end. Bedford North Lawrence will test its mental toughness when it faces nemesis Jeffersonville in the opening game of the Class 4A sectional at Seymour on Tuesday night.

The Stars (11-11) will battle the Red Devils (7-11) for the second time this season in the first game, followed by a rematch between tourney favorite Floyd Central (17-4) and Jennings County (14-8) in the second game. Dark-horse threat Seymour (15-6) will await the BNL-Jeffersonville winner in the first semifinal on Friday, while New Albany (11-11) will greet the FC-Jennings victor in the second semifinal. The final is scheduled for Saturday night.

Neither team has real momentum for this week, with both BNL and Jeffersonville having lost their regular-season finales. Neither team has established stability, with injuries and other factors creating havoc with lineups. Jeffersonville won the regular-season clash at Johnson Arena, but that came down to a controversial no-call on the game-winning basket at the buzzer. So good luck picking a winner in what should be a classic toss-up confrontation. So everything goes back to the basic question: who wants it more?

“At this point of the year, you have to want to continue to play,” BNL coach Jeff Hein said. “You have to want the season to not be over, and our kids are definitely that way. Whether we’re good enough to do that, we’ll find out. But they will give everything they’ve got, just like they have the first 22 games.

“It’s amazing to me. It’s the most balanced sectional I’ve been a part of, year in and year out. It’s just who is playing the best that week. All the teams are even. It’s who shows up and wants to win, who wants to keep playing, who makes shots. I don’t know who it will be.”

There are clues to the mystery. Jeffersonville, definitely an enigma when its record is compared to its talent level, has the gifted athlete in senior Will Lovings-Watts, the Drake recruit who scored 16 points and hit the game-winner against the Stars. The Devils are the defending sectional champions, and this team could mirror last season, when they got hot at the right time and went on a nine-game winning streak en route to the title. It’s a little late for that kind of run, but the potential is there with returning starters Brandon Rayzer-Moore and Kobe Stoudemire.

“They are arguably the most athletic team in the sectional,” Hein said. “Floyd Central is probably the overall pick to win it. But those things don’t matter. You have to go out there and play. It comes down to who makes the least mistakes. We have to avoid the offensive drought, including the first time we played them. Those empty possessions come back to bite us in the end.”

The Devils won the first clash 44-42 on Feb. 10. BNL rumbled to a 12-point with the first basket of the third quarter, then squandered that advantage as the Devils went on a 13-2. Jeffersonville won on the final possession when Lovings-Watts drove into the teeth of BNL’s zone, collided with BNL’s Kaedyn Bennett in the lane, and dropped home a soft 12-footer as the officials discarded a possible charge-block call.

The Stars did a lot of quality things that night. Colton Staggs had 15 points and Colten Leach added 14, BNL shot 53 percent, committed only 7 turnovers and dictated tempo. Did everything except shoot well from the perimeter – and win. That performance, and a late road win at New Albany, should have earned BNL some street credibility, although the popular Indiana Boys Basketball website, used as a biblical reference for the game, gives the Stars a slim 1.2 percent chance to win the crown. The first step toward respect would be conquering the Devils.

“We have to keep the pedal to the metal offensively, and that’s something we’ve had trouble doing,” Hein said. “We’ve had spells where we struggle to score. We have to be aggressive and look to score. If we get a lead again, we can’t get complacent.

“We have to keep them out of transition. That’s a big key, making them play against our set defense. When they get out running, they’re really good. We can’t defend them one-on-one, we have to defend them with five guys. If we do that, we give ourselves a chance.”

Leach (15.0 points, 7.0 rebounds) and Staggs (13.5 points, 2.8 assists) will be offensive keys. BNL’s issue has been getting a third option for balance. The return of Bennett from injury (he missed five games with a concussion suffered in the Jeffersonville loss) could help that as he’s averaged 8 points. That will be crucial if the Stars can fashion another run similar to last year’s charge to the final.

“I like where we are,” Hein said. “It’s nice to have them all back together, we’re practicing as well as we have all year. We have to take it one game at a time. Jeffersonville is first up, and we have to find a way to get this one.”

Floyd Central vs. Jennings County: In a sectional where an argument would be made for a possible pathway to a title for all six teams, this matchup stands out as a possible title bout. The Highlanders are the obvious favorite pick with the best record and the Hoosier Hills Conference title, but the Panthers can match their physical power.

Recent history also suggests a looming battle. The last four meetings between the contenders have included a Floyd win in overtime (in 2020), a Jennings victory (55-52 last season) and another Floyd overtime triumph (67-58 at Floyd on Jan. 21).

“They have played us as well as anybody,” Floyd coach Todd Sturgeon said. “They shoot 25 3-pointers per game and every guy they play can make a three. Therefore they can spread you out and force you to guard individually.”

The Highlanders had late-season momentum (an 11-game winning streak) until an injury to leading scorer and rebounder Caleb Washington. They lost the two home games he missed (60-58 in overtime against Brownstown when Jack Benter his a game-winner at the buzzer) and 51-48 against Bloomington North.

“We haven’t had the whole band together for a while,” Sturgeon said. “However, I really like our team and am optimistic about our chances.”

Washington played a huge role in the win over JC with 20 points. Carson McNulty had 21 for the Panthers, who have the size with 6-8 center Jacob Vogel to counter Floyd’s 7-footer Wesley Celichowski.

‘Floyd’s size and depth make them a very good team,” JC coach Josh Land said. “Their length makes it hard to get open looks, and when they sub they don’t lose much. They’re a well-balanced, fundamentally sound team with no glaring weaknesses.”

Jennings is the most explosive team in the field, having scored 101 (against Madison) and 91 (against Jeffersonville). The Panthers also own impressive wins over Bloomington South (53-46) and Brownstown. Yet they lost the last two regular-season games.

“We’ve had a couple bad losses lately mixed in with our two biggest wins of the season,” Land said. “I think we’re confident and well prepared to compete for the sectional.”

The sectional champion will advance to the two-game regional at Seymour and meet the winner from the Greenwood sectional in the second semifinal on March 14.

First round at Seymour

Game notes: Jeffersonville is the defending sectional champion, while BNL is chasing its first title since 2001. The teams are meeting for the 15th time in postseason play, with the Red Devils holding an 8-6 advantage in those games. BNL has won 18 sectional titles in program history.

Last meeting: On Jan. 21 at Floyd Central, the Highlanders edged the Panthers 67-58 in overtime. Caleb Washington paced Floyd with 20 points. Carson McNulty had 21 points for Jennings.