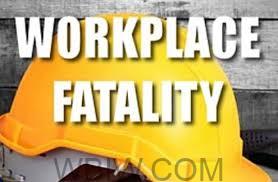 TERRE HAUTE — A man killed after getting caught in an industrial door at a western Indiana steel plant has been identified.

Fire department personnel could not find a pulse on Stewart while he was still caught in the door, and once he was released, they determined he was dead, Plasse said.

An initial investigation indicates the man was possibly repairing or working on the door when he became caught in it, the sheriff said.

The company issued a statement saying, “Our deepest sympathies, thoughts, and prayers are with the family, friends, and the Heartland team.”