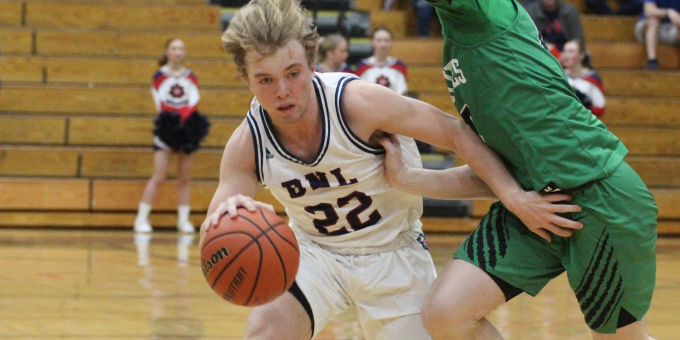 BEDFORD – Jamie Hudson will return to BNL Fieldhouse, where he guided the Bedford North Lawrence program for nine seasons. Only this time he will be sitting on the flip side. For the first time since his departure, Hudson will walk into a familiar environment sporting enemy colors as the Stars host Eastern Greene in the home finale of the 2021-22 campaign on Tuesday night.

From 2007-16, Hudson recorded a 107-96 record at BNL and won a Hoosier Hills Conference title in 2011. When his contract was not renewed, he moved to Bloomfield and guided the Cardinals to a sectional championship. Sometimes the world works in mysterious ways.

”Great memories there,” Hudson said of his return. “There are a lot of really good people. I have no hard feelings about it. If that had not happened, I never would have won a sectional with my son (as a key player for Bloomfield). We did good things there, made a lot of lasting friendships.

”It will be different sitting on the other side.”

Hudson, an Eastern alum, will bring a young team to face the Stars. The Thunderbirds (6-14) start two freshmen, bring another off the bench. They feature 6-6 senior Bryan Rippy, who averages 16 points and 12 rebounds, although he’s played only 13 games while battling back from a broken foot and virus protocols. Senior guard Will Valentine adds 10 points per game.

“We go as the big fellow inside goes,” Hudson said. “We’re two styles. We pound it inside and they spread you out and take you one-on-one.”

BNL (10-10) enters the final week of the regular season with a mission, preparing for the Class 4A sectional at Seymour. The Stars, and everyone else in the state, learned their postseason fate during the state tournament draw. That doesn’t mean overlooking the recently scheduled clash with Eastern (which ultimately replaced an Evansville opponent on the docket) or the last road trip to Jasper. Priorities dictate peering a little ahead. Eastern is just the next step in that process.

“We’re trying to get healthy, continuing to learn, getting ready for next week,” BNL coach Jeff Hein said. “Yes, it would be nice to come out and play well. We’re going to start preparing to win a sectional, that’s what our goal is. Yes, Eastern Greene is on the schedule and we’ll play them, but we’re getting ourselves ready for the tournament.

“Rippy is a big, strong kid. He’s very concerning. We’re very limited in size and that could cause us some problems. We’ll have to do the best we can as a team to take some of his things away. I’m sure they’ll try to pound it to him.”

Eastern’s problem will be containing the attacking guard combination of Colten Leach (averaging 15.4 after his career-high 36 points against Evansville North on Saturday) and Colton Staggs (13.3).

“Leach is a really good, one of the better players we’ll play,” Hudson said. “They go as those two guys go. They don’t turn it over. They’re very patient, they spread you out and Leach is hard to handle. It’s a matter of taking care of the basketball and which team makes shots, who can cancel out the other’s best players.”

BNL and Eastern are meeting for the first time since 2016, when Hudson was coaching the Stars against his alma mater. Braxton Day scored 28 points while leading BNL to a 77-62 triumph that night.

Last meeting: On Feb. 11, 2016, in a game played at the old Toby Yoho Gymnasium at Eastern, BNL prevailed 77-62. Braxton Day had 28 points for the Stars. Nathan Eckerle had 20 points for the Thunderbirds.

Game notes: Eastern coach Jamie Hudson guided the Stars for nine seasons from 2007-2016. He posted a 107-96 record during that span. Eastern Greene drew North Knox in the Class 2A sectional at North Knox.