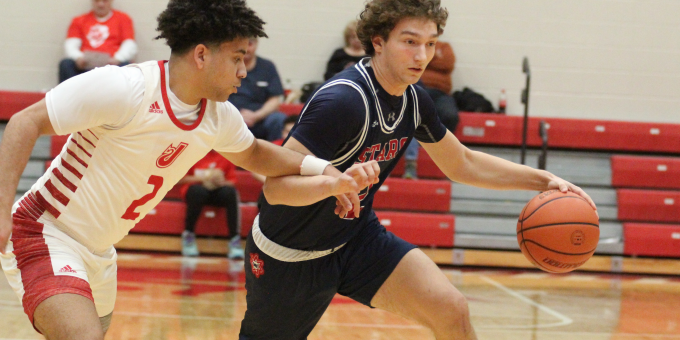 BEDFORD – Bedford North Lawrence will face a rematch with Jeffersonville in the opening game of the Class 4A sectional at Seymour.

The Stars (10-10) will clash with the Red Devils (6-10) in the first game on Tuesday, March 1. Jeffersonville, the defending sectional champion after clipping the Stars in last year’s final, edged BNL 44-42 on a last-second shot by Will Lovings-Watts at Jeffersonville on Feb. 10.

Floyd Central (16-4 and the Hoosier Hills Conference champion) will collide with Jennings County (14-6) in the second game of the first round. Seymour (13-6) will await the BNL-Jeffersonville winner in the first semifinal on March 4, while New Albany (11-10) will meet the FC-JC victor in the second semifinal. The championship game is set for March 5.

In the first BNL-Jeff battle, Lovings-Watts bounced home a 12-footer in the lane at the buzzer, powering the Red Devils to a thrilling comeback victory. Lovings-Watts, a Drake recruit, scored 16 points as Jeffersonville erased a 12-point deficit in the second half and escaped with victory on the final bucket.

With the Devils owning possession after a timeout at 4.9 seconds, Lovings-Watts took the ball out of bounds on the sideline, found teammate Brandon Rayzer-Moore near midcourt, then took the immediate pass back and attacked the interior of BNL’s zone. Two steps and one dribble into the lane, he encountered BNL’s Kaedyn Bennett, the collision sending Bennett to the deck. Charge or block? Neither was whistled, and Lovings-Watts dropped home the game-winner, rolling it softly over the front of the rim.

BNL played brilliant basketball while roaring to a 31-19 lead with the first basket of the third quarter. But the Devils rose from the fire, battling back with a 13-2 run. Kobe Stoudemire added 10 points for the Devils. Colton Staggs had 15 points and Colten Leach added 14 for the Stars.

“The kids are excited because they feel like we had a chance down there to get ‘em and just didn’t finish them off,” BNL coach Jeff Hein said. “So you look at the revenge factor, a loss we have a chance to avenge.

“They’re obviously very talented, they’re better than their record. They played really well against New Albany (a 70-58 win after the triumph over BNL), they’re starting to click a little bit. Our kids know they can compete with them and have a chance to beat them. We’ll have to play really well to have a chance to get to the semifinal.”

The Devils have faced adversity this season with a Lovings-Watts five-game suspension, injuries and issues with virus protocols among the coaching staff. Jeffersonville will play seven games in February to make up for lost time.

”With everything we’ve had going on, we are just happy to get to play,” Jeffersonville coach Andrew Grantz said. “It’s going to be a challenge.”

BNL is seeking its first sectional title since 2001. The Devils have won the last three tournament clashes with the Stars.

In the other first-round game, the Highlanders edged Jennings 67-58 in overtime at Floyd on Jan. 21.

The sectional champion will advance to the two-game regional at Seymour on March 12.