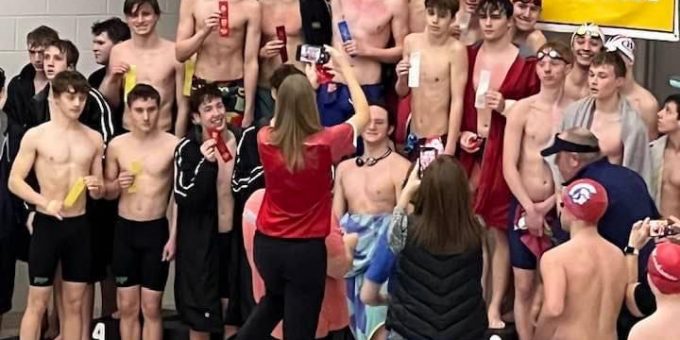 Jasper won the meet with 470 points, edging the Stars by 30 points for the team title.

BNL also won the 200 medley relay, with Baker, Garrett Henson, Swenson and John Allen combining to post a time of 1:38.11 (four seconds better than the qualifying time). The Stars then took the 400 freestyle relay with Swenson, Trey Kimbley, Baker and Allen teaming to clock 3:16.05 and clip the Wildcats by .10 seconds at the wall.

The winners in each event automatically qualified for the IHSAA state meet at IUPUI on Feb. 25-26. BNL divers Jaevyn Nikirk (third with 238.25 points) and Cameron Miller (fourth with 214.30) advanced to the diving regional at Jasper on Tuesday.

“I don’t know where to start,” BNL coach Adam Young said. “Bottom line is we came up a little short. However, with mostly the same lineups as last year, we gave them a big-time scare. After getting run out of the pool by 180 points last year, we closed the gap to just 30 and we are sending a large contingent to state.

“I told the guys we needed to be perfect to have a shot, and if we weren’t perfect we were darn close.”

“We are putting up times that are close enough that we can think about breaking school records next weekend,” Young said. “I’m not sure we’ve had a 400 free relay team come any closer to breaking that record in almost 30 years. I think we can get it next weekend.

“Every single swimmer in every single race Thursday and today amazed me. We squeezed every bit of juice out of the orange and left it all in the pool. I don’t know that I’ve ever seen a more complete effort from top to bottom. I could go on and on about today. Top to bottom, one of the best teams I’ve had the pleasure of working with, and we still have plenty of business to take care of in Indianapolis.”

Young was voted the sectional Coach of the Year – which usually goes to the team champion – by his peers.

“I was taken by surprise,” Young said. “It’s a huge compliment and honor. More than that it really speaks to the quality of the coaching staff and team we had this year. Assistants Paul Gabhart, Lindsay Pappas and Abbi Rich all worked their tails off, and I can’t say enough about the impact they had on this team and this season. No way any of it happens without them.”

The state finals preliminary races are scheduled for Friday, with the top eight seeds in each event qualifying for the state championship races. Places 9-16 will qualify for the state consolation races.