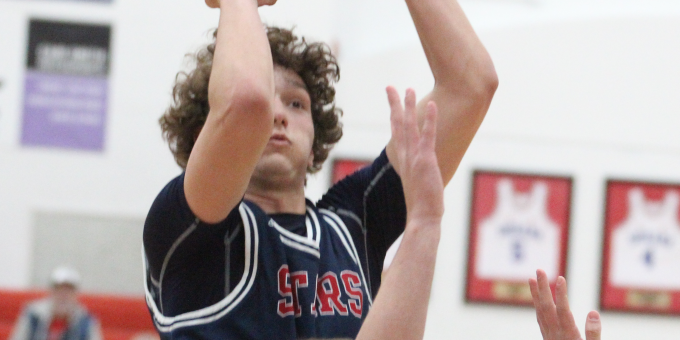 NEW ALBANY – Colten Leach took some punishment. Red welts under the eyes were evidence. But he dished out far more, powering Bedford North Lawrence to its most impressive victory of the season’s second half.

And speaking of seconds halves, the Stars were almost perfect during that span while pulling away for a eye-raising triumph, ending a 10-year drought with a road victory over New Albany on Friday night. What a way to end a five-game road trip.

Leach, firing punches from close range and connecting for body blows that added up to huge points, powered the Stars to black-and-blue, 60-48 win over the Bulldogs, scoring 20 points and yanking down a career-best 16 rebounds as BNL (10-9) spoiled New Albany’s senior celebration. Colton Staggs added 15 points and dead-eye sophomore Trace Rynders added 12 as BNL won in the Doghouse for the first time since the 2011-12 campaign.

Accident? Not really. BNL never trailed, not once. The Bulldogs (10-10) got close, had chances, missed enough close-range shots to total the same distance as the halfcourt splash from Future Brooks at the halftime buzzer. That could have given the Dogs a boost of energy. But coming off an emotional loss to rival Jeffersonville just 48 hours earlier, New Albany’s passion pit was dry.

The Stars, on the flip side, were stoked, hitting 13 of 16 shots in the second half to overcome some sloppiness against the press and finish off the second straight victory over New Albany. The other key was BNL’s quick start, a rugged burst to an 18-6 advantage during the first 9 minutes.

“When we have the lead, we’re usually pretty dangerous,” BNL coach Jeff Hein said. “We find ways. To win down here is always difficult. Any conference win on the road is tough. They were very aggressive. They’re just physical. You have to play like men.”

Man up? Leach was that guy, dominating the glass, scoring from the gut of the defense. In the fourth quarter, with New Albany in desperation mode, he had half his points.

“It was a tough one,” Leach said. “To come down here – we haven’t won in 10 years, was that it? – we’re on track. We’re not going to out-athletic a lot of teams. We have to be fundamentally sound.”

Nothing is more fundamental that shooting, and the Stars were sensational. After New Albany scrambled within 34-32 late in the third quarter, Leach beat pressure for a layup, Rynders fed Jett Jones for a 15-footer, Kole Bailey got free for another layup as the Bulldogs extended the defense to 84 feet, and Rynders buried a bomb from the corner for a 43-35 lead heading to the final period.

New Albany got back to 49-45 with 5 minutes left, but another Bailey layup, a Staggs rebound and coast-to-coast dash for a beautiful left-handed, wrong-foot layup, and a Leach basket off a loose ball gave BNL another double-digit lead. That was enough.

“Leach played really well,” Hein said. “For us to compete against high-level teams, like New Albany is, everyone has to play well. Everyone did a great job. We played so well as a team on both ends of the floor. We got good shots, we shared it, attacked their extended defense.”

Josten Carter was one of the few highlight makers for the New Albany, scoring 24 points. Tucker Biven, the celebrated Louisville baseball recruit, added 14. But New Albany was haunted by missed layups, by shots that teased on the rim but rolled off. The Bulldogs were only 17 of 54 overall.

“We had some looks – I credit them, they play good defense – that we just didn’t finish,” New Albany coach Jim Shannon said. “We had ample opportunity to score, and we just didn’t. We looked a little lethargic. That loss to Jeffersonville was a stinger, but I’m not making excuses. Bedford played really well.”

“We were fortunate they didn’t shoot the ball well,” Hein said. “But at the same time our defense had a little something to do with that.”

Rynders had four treys, Staggs was a driving force, and Leach got most of his points in the paint. That’s BNL’s offense at its best.

”I’m not in looking at it from the standpoint of an embarrassing loss. It’s not. They’re a good team, better than their record.”

BNL finished Hoosier Hills Conference play with a 2-4 record. The Stars will return home – finally – with a two-game winning streak as momentum for a Saturday date with Evansville North. The Huskies topped Castle 64-63 on Friday night.