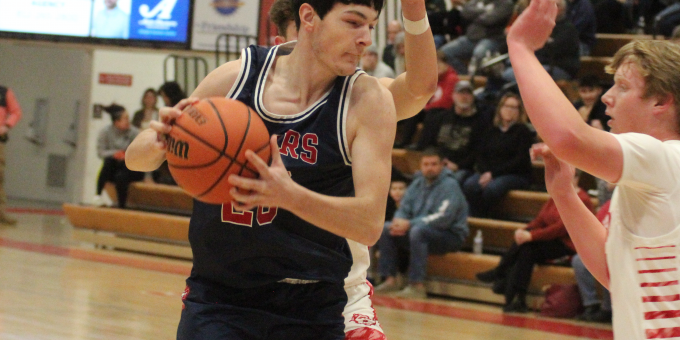 BEDFORD – Dylan Endris will leave Bedford North Lawrence ranked No.1 on a list – the first player to ever design his own senior banner.

Graphic design is his intended career choice, one Endris put to good use when he created his banner that now hangs on the south end of BNL Fieldhouse, overlooking the court where he will celebrate Senior Day as BNL’s lone upperclassman when the Stars host Evansville North on Saturday evening.

He’s the sole survivor, the Harry Potter of the program (minus the lightning bolt scar), the boy who lived through four years of practice and sweat. No magic wand, just determination and perseverance. Everyone else in his class dropped by the wayside, thus he stands alone.

Endris will get his moment in the spotlight, appearing at midcourt during pregame ceremonies, stepping into the starting lineup against the Huskies. That’s the tradition. He didn’t go through all this for glory, and there’s been little of that in terms of playing time. That’s not why he fought through while others didn’t make it. His motivation was a personal connection with a coach who saw value.

“It’s been kind of difficult,” Endris said. “These guys (on the team) have done a really good job of being friendly, making me feel at home. So being the only one in my class to stick it out means something to me. It’s been a journey.

“I’ve looked up to Coach (Jeff) Hein. When he came in as a new coach, he’s really motivated me. He looks up to me as much as I do him, and he wants me to succeed. I see that.”

Hein doesn’t sugar-coat anything. So before the season started, he sat down with Endris for a point-blank, here-it-is conversation. His role would be limited, his reward little in comparison to the time investment. Accept that, or do something else this winter. Endris chose to endure.

“He’s handled it really well,” Hein said. “We had the talk with him. ‘Here’s your role. Can you handle being part of the team and being supportive? If you earn minutes, you’ll get a chance. But can you handle it if you don’t get a chance to play?’

“And he’s handled it exactly the way you want. Total team player. Comes into practice and works hard every day, continues to put the work in, always with a smile on his face. I don’t know how he does it, because if it were me, I would want to play more. He’s accepted it, and when his number is called, he’s responded.”

Endris has appeared in eight games thus far, totaling 12 points. The bulk of that came against Mitchell on Tuesday, when he contributed 6 points and 7 rebounds during the 65-31 blowout of the county rival. Nobody had more fun during those 12-plus minutes.

Most of his time is spent on the sideline, supporting his younger teammates during struggles, cheering during success. Behind the scenes, it’s early-morning shooting workouts, afternoon practice sessions, toiling in anonymity to help the Stars improve.

“When I get in, I look to provide when I can,” he said. “I look to see these guys improve. It’s a team sport, it involves everyone coming together as a team and working together. I try to provide that extra level of maturity, telling them what to do and how to do it.

“Attitude is everything. Come to practice with a good attitude, give 100 percent, and it will show up. You will get that back, people will surround you with good things. They will tell you they’re just thankful to have you in the program.”

So while some become role models for the highlights and wins, others do that in different ways. Work ethic, after all, is a learned skill. And there is a short supply of it.

“It’s great to have kids like that around, in today’s society,” Hein said. “You don’t see those every often. It’s something he’ll remember for the rest of his life. If he had not played, he wouldn’t have those memories. He stuck it out, persevered. I haven’t heard one complaint, and in today’s world that’s hard to find.”

When Endris joins the lineup to face the Huskies, the Stars will see a mirror image, a team lurking around the .500 mark with two scoring threats. North (9-10 prior to Friday night’s road trip to Castle) features senior Ryan Caddell (12.7) and senior Cameron Gehlhausen (12.2).