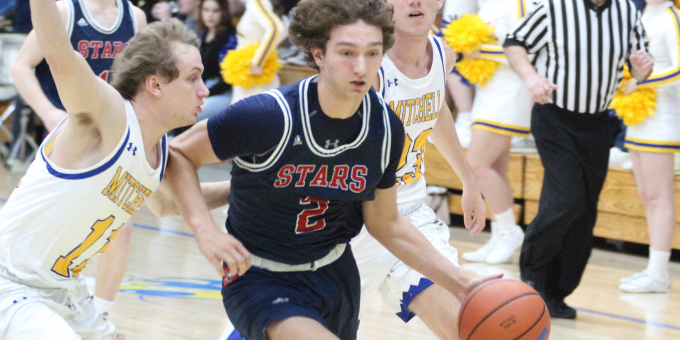 BEDFORD – For a baseball player, destined for a major Div. I program or maybe even the Major Leagues, New Albany’s Tucker Biven is a diamond-studded basketball player. Cut from coal, brilliant under the microscope, polished and sparkling on the court.

Biven, a University of Louisville recruit who could skip college if drafted, will be perched on the ring of attention when Bedford North Lawrence ends its five-game road trip with a night in the Doghouse on Friday night. New Albany has been a difficult destination in the past, and the Stars (9-9) will still be shuffling their lineup while waiting for junior forward Kaedyn Bennett to recover from a recent injury.

The Bulldogs (10-9 after falling to rival Jeffersonville 70-58 in a dunk-fest on Wednesday night) were expecting brilliance this season, although this year’s clarity suffered a tarnish when senior guard Kaden Stanton transferred to Louisville Ballard. Biven has shouldered much of that missing scoring load, averaging 17 points per game and going over 1,000 career points earlier this season.

“He’s been a great asset for our program, truly one of our better players,” New Albany coach Jim Shannon said. “To be as good as he is at baseball, and still play basketball and play hard at a high level, it says a lot about the kind of person he is. In the off-season, he’s totally baseball, for obvious reasons. And here he is, running up and down the court, going hard in practice, diving on the floor. I take my hat off to him for how hard he plays.”

Shannon recently reached an amazing milestone, recording his 600th career win, and a chunk of those have come at BNL’s expense during his 24 seasons with the program. New Albany won 12 straight in the series until the Stars stunned the sectional with a 49-48 win in the semifinal last season, and BNL hasn’t won at New Albany in 10 years.

However, the Stars have played some of their best basketball of the season on the current road swing, pushing Jeffersonville to the last possession, winning in overtime at Loogootee and thrashing Mitchell.

“We’ve handled it well,” BNL coach Jeff Hein said. “It was a blow to lose Bennett. We had no time to prepare (for the game at Brownstown), so having some time enabled us to get back on track. We played well at Mitchell. It would be nice to get back to full strength, but that’s not going to happen any time soon.”

In Bennett’s absence, BNL adjusted with Houston Corbin in the lineup against the Bluejackets. Kole Bailey will continue his role as sparkplug off the bench. “I was happy with the way Houston played in his first varsity start,” Hein said. “We decided Kole was better coming off the bench, he’s better off sitting there and watching the game, figuring things out. Some kids, it works.”

“What impresses me the most is how well they handle the basketball,” Shannon said. “I really credit Coach Hein and the kids for how well they play at the guard spots. They all handle it, they really shoot it well, they play good defense. The five he has out there really work hard. I like his team. They’re dangerous.”

“They have big, strong kids,” Hein said. “They have size and strength, they’re hard to match up. Biven can shoot the three well, he can shoot the pull-up, and he’ll post you up. He’s a natural athlete.”

Shannon got his 600th on Jan. 15 against Scottsburg. He’s now 17th on the all-time state list for career wins.

“I could say it was just another game, but that would be a total fabrication,” Shannon said. “It meant a lot. Everywhere I’ve been, I’ve really enjoyed it. Kids have been wonderful, great basketball players, great assistant coaches. So even though the 600 goes under my name, there are a lot of people beside mine. I’m just really thankful.”

New Albany won last year‘ s regular-season clash 53-46 at BNL as Biven exploded for 25 points. But BNL won the rematch two weeks later. Ben Cosner’s last-second jumper was the difference as the Stars advanced to the sectional final with a thrilling 49-48 victory. Stanton had 25, but the Stars countered with three in double figures and recorded the upset when Cosner stroked home a jumper to complete an 11-point rally in the final quarter.

Last meeting: The team split two games last season. New Albany won the regular-season clash 53-46 at BNL, but the Stars got revenge with a 49-48 triumph in the sectional semifinal at Seymour as Ben Cosner hit a game-winning shot.

Game notes: BNL has not won at New Albany since the 2011-12 season. The Bulldogs won 12 straight in the series until last year’s sectional semifinal. New Albany coach Jim Shannon ranks 17th on the all-time state list with 604 victories.