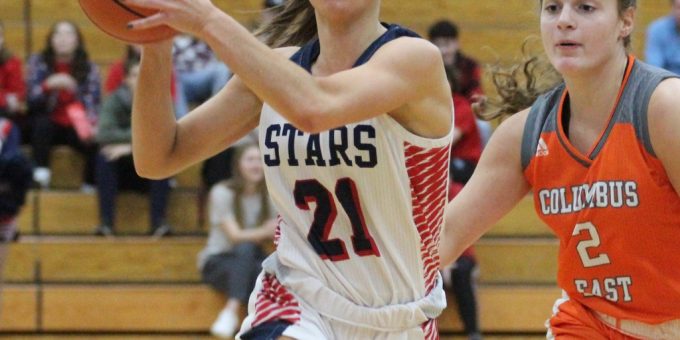 BEDFORD – Ever watch those classic Western shootouts and wonder how the heroes never had to stop and reload, never ran out of bullets? Amazing how that worked, the magic of movies.

Bedford North Lawrence basketball is similar, never running out of ammunition, always reloading rather than rebuilding. Amazing how that works. Magic? There’s nothing illusional about hard work, about talent, about the power of tradition and the strength of commitment.

Over the past 11 seasons, the Stars have claimed 11 consecutive Class 4A sectional championships (the longest current streak in the state), made the Elite 8 six straight seasons, and won a state-best 257 games with two state titles. That level of excellence is remarkable, almost self-sustaining. Lose key players to graduation? Someone steps into the void and the drumbeat, the heartbeat of passion and success, pounds on.

Anyone expecting slippage continues to be disappointed. Don’t look for that to happen any time soon.

Coming off an outstanding 22-3 campaign in 2020-21 and losing a handful of seniors (including an Indiana All-Star), and suffering a key offseason loss to a season-ending injury, the Stars could have been vulnerable. Instead, they solidified into one of the state’s best, climbing to the top of the poll at one point, going 24-3 before falling short against No.2 Franklin in a thrilling regional final.

With junior point guard Karsyn Norman and sophomore wing Chloe Spreen as the high-profile stars, with a unheralded supporting cast that was perfect in the assigned roles, BNL was once again among the state elite, a title contender until the final minutes of the regional championship clash. The Stars conquered seven eventual sectional champions, and three semistate qualifiers, during their fantastic run. They plugged in three new starters and never faltered.

“You have to think they overachieved a little bit,” BNL coach Jeff Allen said. “Not that they weren’t capable, but I didn’t expect it. When Emma Brown (a junior projected to be a key backcourt contributor) went down with an injury in the fall, I don’t think I expected this group to be that successful.

BNL quickly answered questions about its quality for 2021-22, rallying from a 13-point deficit in the second half for a historic win at No.3 North Central in the fifth game of the year. Many of the Stars pointed to that victory as the springboard for the season.

“It’s amazing what a little confidence can do, when you do something that might be difficult,” Allen said. “We had never won there before, and the way we won, coming from behind, that was probably the big tip-off point. And you have to talk about the day we played East Central and Noblesville (in the Pete Pritchett Classic on Dec. 22), won both those games. That added to that confidence.”

The Stars roared into the postseason, surviving a battle with Jennings County in the sectional final and conquering Castle in the regional semifinal. They came up short in the bid for their fifth regional title in the last 11 years, suffering the heartache of the 58-52 loss to Franklin.

“I’d sure like to make it a little further,” Allen said, the sting still smarting.

BNL got that far on a lot of grit, with a lineup that lacked size of stature but not size of heart. Spreen, for the second straight year, was a force as the team leader in scoring (16.2) and rebounding (6.2) as she continues to attract recruiting attention from almost every major program in the country. There was no sophomore slump. Norman was the catalyst, averaging 15.0 points and guarding the opposition’s top scorer as she established herself as a Junior All-Star candidate.

“Karsyn’s limit is placed by Karsyn,” Allen said. “How much does she want to improve, how much does she want it? The sky is the limit for her. She’s one of the most under-recruited guards in the state. And she feels a little bit of a chip on her shoulder. So she’ll continue to work to be even better.

“Chloe will make a huge jump. It’s the understanding of the game, the maturity out on the floor. She will be a totally different player, with the experience she got and another summer of basketball. They’ll be hard to handle.”

BNL will lose three seniors, each vital cogs in the machine. Carlee Kern, undersized in the post, averaged 5.8 points and 3.9 rebounds. Ella Turner was the key sixth player in the rotation, asked to add muscle in the interior. Hadley Teague was the consummate teammate. Sometimes the void can’t be measured by statistics.

“Those kids have been amazing,” Allen said. “You have to have those type of kids, a good kid that wants to be there and works hard. Carlee had a sensational senior year, she helped us in so many ways, with her leadership, her toughness, her ability to score. Ella did a great job in her role. You’re always going to miss kids like that. We’ll have to have younger kids step up.”

The Stars were young this season, but that will change. Madisyn Bailey (7.0 points, 4.3 boards, 3.0 assists) and Mallory Pride (6.1 points, 5.3 rebounds) now have a year of battle experience. The key now will be the development of players like backup post player Emma Crane, the return of Brown from her knee surgery, the jump from the junior varsity for Tori Nikirk and Bella Jackson, the readiness of incoming freshman (Trinity Bailey, Ellie Tillett and Paige Burton) to make an impact. BNL will be blessed with guards once again.

“It depends on how much they want to work on their game,” Allen said. “Emma Crane could give us some physicality and play the lane area. She has the ability to help us. I expect these kids to get better, and I think they will get better. They’re a driven bunch of girls. From the standpoint of maturity and improving their games, I expect them to be even better.“

“Our coaching staff is really good about developing player-coach respect,” Allen said. “They respect what we tell them, and we respect them as players. We demand a lot out of them and try to provide that in return. So there’s a mutual respect that leads to everyone wanting to do their absolute best.

”It’s the culture, of how we go about things. It’s the tradition we’ve had of winning. That carries kids a long way, when they expect to win when they go on the floor. It’s how we prepare, talk about competing in games. That carries year to year. They know what’s expected, and they expect to win. You have to have talent, but that can keep you elevated at a high level.”