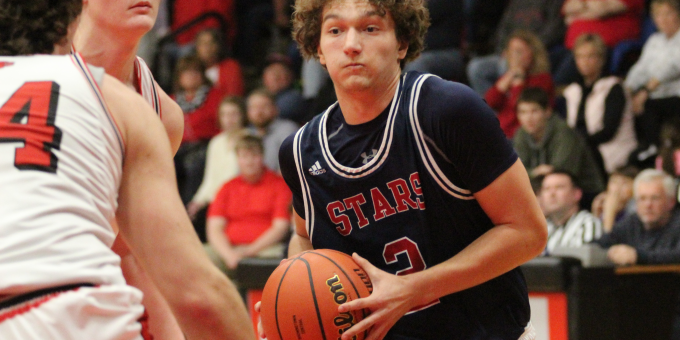 BEDFORD – Wounded and weary. Tired from the brutal schedule and tired of losing. Fighting mental fatigue from the February grind and physical adversity from injuries to key starters. That description covers both Bedford North Lawrence and Mitchell as the county rivals prepare for their rescheduled clash.

Exactly a month after the original renewal of the annual series was sent to take place, the Stars will make the short trip down State Road 37 on Tuesday night, looking to extend the 35-game streak over their neighbors. BNL (8-9) is in the midst of a five-game road trip, playing its fifth game in 10 days, coming off back-to-back losses and licking its wounds.

The Bluejackets (6-11) are mired in a five-game losing streak, struggling to score, missing another starter (in addition to the one that was ruled ineligible earlier this season. Somebody will get a much-needed, get-well victory. Nothing cures ills like winning.

“We’re tired,” BNL coach Jeff Hein said. “Three games in four days (last week) is difficult. That took a lot out of us. We’re just beat up. But we need to play.”

The Stars suffered setbacks at Jeffersonville (44-42 at the buzzer) and Brownstown (70-59) to halt any momentum, and they lost junior starter Kaedyn Bennett with an injury during the clash with the Red Devils. His status remains uncertain.

”Kaedyn is our glue guy,” Hein said. “So playing without him was difficult. We need him on the floor to be very good. He does so much in terms of defensive positioning, playing solid in the middle. If not, we have to plug people in there.”

Mitchell’s problems started to pile up when leading scorer Kade Wigley, averaging 13.5 points, was ruled ineligible in early January. Now sophomore forward Ben Seitzinger is out again with an ankle injury, and Mitchell has averaged only 34.8 points during the current skid. The Bluejackets have shot 26 percent over the last two games.

“We have to do a better job of putting kids in spots where they are confident and can be successful,” Mitchell coach Jackson Ryan said. “We’re just not shooting the ball very well right now. We’re getting good shots, we’re stressing trying to find great shots.”

BNL, even if a little short-handed, will rely on continued production from scoring leaders Colten Leach (14.3 after a career-high 31 points at Brownstown during a Brayton Bailey-esque performance) and Colton Staggs (12.9).

“Look at what Leach and Staggs are doing,” Ryan said. “They’re the best 1-2 punch we’ll see all year. They’re as hot as anybody, and a major key for us is stepping up on those two.”

Hein’s focus, now that freshmen will be added to the JV roster and additional depth will be available, will be pinpointing any added scoring punch and finalizing rotations (especially if Bennett is sidelined for any length of time). Defense will also be a priority as BNL looks to contain Mitchell leaders Nick Mundy and Andrew Shepherd.

“I hope we defend better than we did at Brownstown,” he said. “If not, they’ll score 70, too. We didn’t defend well, didn’t rebound well.”

Last meeting: Last year at BNL, the Stars rolled to a 55-40 triumph. Jackson Miracle had 12 points and Colten Leach totaled 11. BNL went on a 15-1 run to a 26-point lead in the second half. Nick Mundy had 8 points for the Bluejackets.