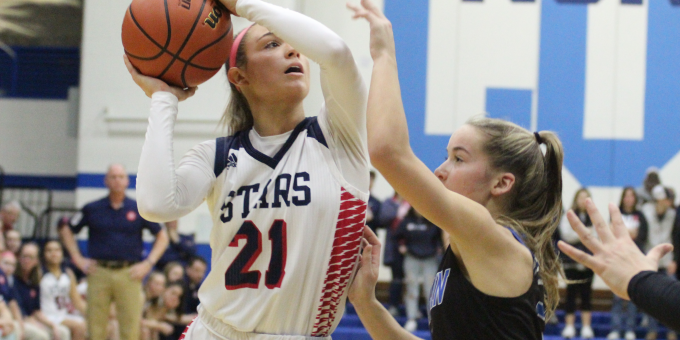 No.2 Franklin, the defending champion, swished and swooshed to a second straight title, again at BNL’s expense, with a thrilling victory in the finale on Saturday night. Pushed to the brink, the Grizzly Cubs responded with a champion’s determination, fighting off a gallant challenge to win and advance to the Class 4A semistate.

With senior star Ashlyn Traylor providing the power, with sniper deluxe Scarlett Kimbrell causing some red eyes with dead-red treys, Franklin (27-1) rumbled to a 58-52 triumph, hip-hopping to the FInal Four and a surprise date with Mooresville (the winner of the regional at Decatur Central) in the one-game semistate on Feb. 19.

The Stars (24-3), destiny’s darlings for so long this season, had two brief spurts of languishing offense, and that proved the difference as Franklin erased a halftime deficit and surged in front during the final six minutes of the fourth quarter. That’s all it takes during a clash of potential state champions.

Traylor, a late offseason addition to the roster, scored 19 points, her sister Adelyn Walker had 14 off the bench, and Kimbrell buried four deep bombs to total 12. That was too much firepower for the Stars to handle, although they were in charge with a 27-23 lead early in the third quarter, with a 44-43 edge 90 seconds into the fourth, and standing on the precipice of victory with five minutes remaining. When they go back to review two key time spans, they will shed a few more tears for what might have been.

After Carlee Kern opened the second half with a wing bomb, BNL missed its next four shots as Franklin reversed the outgoing tide with a 10-0 run, with Kimbrell dropping two from extreme distance – “Holy smokes, they were 40 feet,” BNL coach Jeff Allen said with a tint of amazement. Traylor followed that electrical charge with two baskets for Franklin’s biggest lead at 38-30.

The Stars battled back, with the best player on the court leading the comeback. Karsyn Norman slashed to a 3-point play to start it, dropped a bomb from the key to finish it, and BNL had the lead – ultimately its last – at 44-43. Her last trey cut the gap to 48-47. Then another dry spell, four minutes and four bad possessions as Walker streaked to a layup, Traylor muscled home an 8-footer, and BNL’s deficit was 55-47. That was too much.

“I’m proud of my kids,” Allen said. “That’s a really good team. They probably have more depth than us, more high-level players than us, and we battled to the end. Our kids played as hard as they could. They made some mistakes, missed some shots, but we were right there.

“They haven’t had a lot of tests, and we tested them. I’ve got a lot of sad kids in there right now.”

Franklin got tested by BNL’s sensational start, with Norman scoring three times, with Chloe Spreen racing to a transition basket and a 15-8 lead in 5-plus minutes. The Cubs settled as Traylor scored twice, as Walker made a trey and Kimbrell hit her first bomb. Mallory Pride’s layup off a Spreen pass and Spreen’s 15-footer gave BNL a 24-23 halftime lead.

Then came the spurts of futility, and they were fatal.

“That was the difference in the game,” Allen said. “They were good looks, they just didn’t go in. That’s the way the game goes. As a coach, you want your kids to compete as hard as they can. We did that.

“We were right there, but in a game like this, you can’t miss four layups and two free throws in a stretch. You can’t do that in a high-level game like this.”

Franklin’s reputation is one of bombing, with nearly half its shots launched from distance this season. None were bigger than Kimbrell’s four, three in the third quarter, and nothing was more important than Traylor’s interior power. Kuryn Brunson, the hero of last year’s regional conquest of the Stars, added 8 points.

“It was much harder this year,” Franklin coach Josh Sabol said as his club cut down the nets. “Last year people knew we were good enough, but we hadn’t done it. This year there was no surprise. Back-to-back regional championships is special.

“Our girls come up big. It’s awesome. They’re just competitors. They have a refuse-to-lose spirit. Scarlett is the most competitive player. She takes a lot of pride in her shooting, and it showed tonight.”

“We weren’t supposed to give those up,” Allen said, although there was too much pressure to not allow something to slip through. “Maybe it was fatigue, but we were supposed to stay on the shooters.”

Nobody could stay on Norman. She totaled 26 points, including five treys. Spreen totaled 13 points and 10 rebounds. But BNL, playing in its sixth straight regional final, come up short in the chase for the program’s 14th regional crown.

In the northern 4A semistate, Noblesville will face Crown Point. The state final is scheduled for Feb. 26 in Indianapolis.