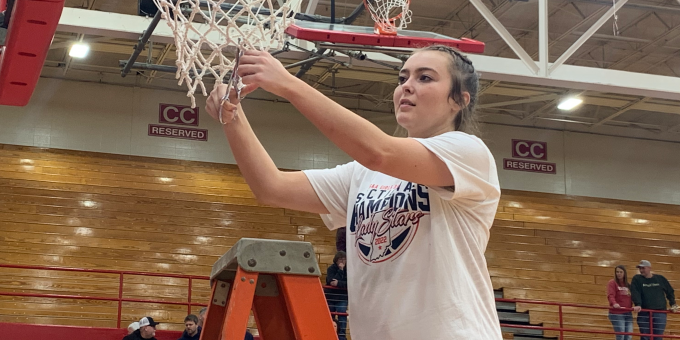 BEDFORD – The pictures, dripping with cuteness and sparking social media ‘likes’ and comments with wildfire speed, speak more than the ancient adage and are worth more than any cryptocurrency. Young kids, future stars for Bedford North Lawrence, posing with their heroes after a tournament triumph.

Chloe Spreen, a little sheepish as Jenna Allen bends down to hug her. Madisyn Bailey, glued to her seat – hey, even smiling a little – while watching the Stars march toward a state championship. Those photos were snapped nine years ago. Where does time go? It marches on, and so do the Stars.

Facebook calls these “memories.” For BNL, it’s a legacy.

For the 11th consecutive season, BNL celebrated a sectional championship, conquering Jennings County in the turbulent finale on Tuesday night. There’s little time to revel in that triumph, as the No.3 Stars (23-2) have a quick turnaround to prepare for a rematch with Castle (19-4) in the regional semifinal on Saturday at Columbus North. But that streak, remarkable and historic in the class basketball era, deserves some additional pondering.

BNL’s remarkable championship run (including 33 straight sectional games) is the longest current streak in the state, it’s the longest ever in Class 4A, and it’s one short of the longest in state history (Fort Wayne Canterbury with 12 from 2004-15) since the introduction of class basketball in 1998. Rushville owns the overall state record with 18 in a row from 1980-97. Winning now is exponentially more difficult.

The Streak is not self-sustaining. That takes talent, on the court and on the sideline, which BNL has been blessed with in abundance. But the pride and passion that fuels it has been a renewable source of energy, basketball’s version of a fusion reactor. The only price is determination. And the current Stars were in the spotlight as they climbed the ladders to sheer off the nets in Johnson Arena. Young eyes were watching closely and glistening with wonder.

“That’s a tremendous part of our success, that we have young kids watch the high school kids,” BNL coach Jeff Allen said. “They look at that and say ‘I want to do that one of these days, I want to be a part of that.’ They’re willing to do the work and understand what it takes. That will continue to go as long as we can keep the excitement and the winning up.

“You have to have talent to be good, there’s no doubt. Nobody will tell you different. But you have to have that fire and passion to win games that are dogfights, like the last one we had. If you don’t have that, a bounce or the ball here or there and you lose that game. You have to have kids that have the determination to win.”

How tough has it been to win 11 in a row? Allen, a fighter in the ring during a previous life, compares it to taking a punch. BNL is the target, getting the best shots the familiar Hoosier Hills Conference foes in the sectional field can launch. There have been some great escapes, ducking and dodging the knockout – and there have definitely been some wrenches fired for the Stars to dodge. They clipped Jennings by one point in 2016, survived a double-overtime epic with Jeffersonville in 2018, and topped Jennings again the last two seasons.

“It’s definitely a monumental feat,” Allen said. “We’ve had a lot of great players that made that happen. It’s not all Xs and Os, you have to have talent on the floor.

”It’s really a tough task. It’s just remarkable. There’s been a little luck involved, there’s no doubt. But it’s just the resilience of our kids, the toughness of our kids, the tradition that they just expect to win and won’t settle for anything less. That’s where it comes from.”

That was tested once again on Tuesday night. The Panthers, facing the Stars in the final for the fourth straight year, had enough. They had let a 12-point lead slip away last year, they were hell-bent on ending BNL’s reign. BNL’s 38-36 victory, in jeopardy until the last shot clanged off the rim at the buzzer, was a sheer struggle for survival.

“It was a battle,” BNL senior Carlee Kern said. “We were beating on one another. I’m just glad we pulled through. Everybody is out to beat us. We know that. We just have to keep doing what we do.“

While ecstatic in victory, the Stars had to acknowledge respect to the vanquished. Nobody deserved that more than Jennings sophomore Juliann Woodard, who played possessed. She had 15 points, 21 rebounds, and swatted shots out of the sky like a Patriot missile locked on its target. At times, it seemed like there were two of her on the court, so large was her presence. She followed the Spartan creed: win the battle or be carried home on the shield.

“Her level of play really changed the game,” Allen said. “She made it difficult for us offensively, and she pretty much had her way with us on the offensive end for them. She was a game changer. When she plays like that, she’s phenomenal. She was very determined to win a sectional title. She’s a great competitor. You have to respect a kid like that. She left it all out there and you have to admire a kid who goes after something they really want.”

Now the question is BNL’s ability to bounce back from the emotional and physical drain of the sectional (which ended three days late because of weather postponements) and refocus for the regional.

“I can’t answer that until Saturday and see how we play,” Allen said. “I like having a full week to prepare, but to tell the truth, practice gets a little old this time of the year. I liked to think, in two days, we can get ready.”

BNL will meet Castle in the second semifinal, with No.2 Franklin (25-1 and the defending champion) set to face No.11 East Central (22-4) in the opener at 10 a.m. The winners will clash on Saturday night. The Stars are chasing their 14th regional title. They’re won their last three at North. They will be under the gun as they seek to earn a berth among the Final Four.

“There’s always a little pressure,” BNL junior Karsyn Norman said. “We want to go as far as we can.”

The regional champion will face the winner from Decatur (where No.8 North Central is the favorite) in the one-game semistate (at either Jasper or Jeffersonville) on Feb 19.