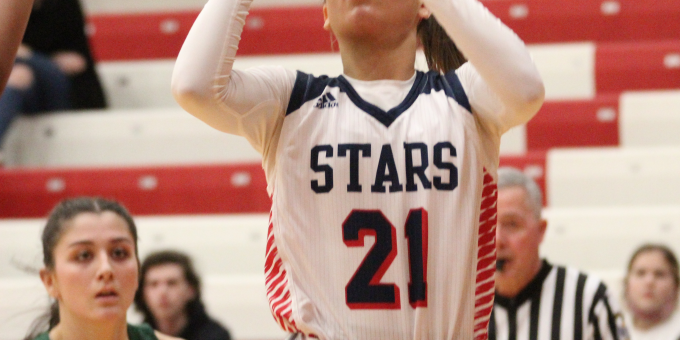 JEFFERSONVILLE – For the fourth straight season, in the ultimate definition of deja vu, Bedford North Lawrence will battle Jennings County for the Sectional 15 championship. That’s just the way it is, some things will never change. The Panthers would like to make one minor change – inscribe a different winner on the trophy.

The third-ranked Stars (22-2) will seek to extend some remarkable streaks when they battle Jennings in the title tilt on Tuesday night at Jeffersonville. BNL has won 10 consecutive sectional crowns (the longest current run in the state), 32 straight sectional games, and 22 in a row over the Panthers (17-6). All good things must come to an end, according to the ancient proverb. Jennings just wonders when.

So far, the crown has been permanently attached. The Panthers almost pried it off last season, pushing BNL to the brink in the postseason clash before falling 55-51. During the regular-season rematch at Jennings on Nov. 30, the Stars conquered the Panthers 50-34, sending a message that still rings loud 10 weeks later: BNL remains the big dog.

But the Panthers have the firepower for the upset. They have the best post player in Southern Indiana in 6-0 sophomore Juliann Woodard, who nearly carried Jennings to the title last season with 20 points and 9 rebounds, and they have a perimeter weapon in sophomore guard Alivia Elmore, who was the leading scorer against BNL during the first encounter.

BNL coach Jeff Allen will worry first about Woodard, who was limited to 8 points but grabbed 14 boards during the November battle.

“They have size on us, which is a difficult thing,” Allen said. “Woodard rebounds so well, that’s always a concern. We basically play a bunch of guards. If we can pressure the basketball and make it hard for them to score, that’s the big thing. They’re good. Hopefully we can make it difficult on them in the halfcourt, and rebounding is key.”

BNL’s defense was the difference the first time. The Panthers went over 8 minutes in the first half without scoring, which is always lethal against a team of BNL’s caliber. Chloe Spreen paced the Stars that night with 19 points, Karsyn Norman added 17.

“BNL is BNL, very fundamentally strong, very guard oriented,” JC coach Kristi Sigler said. “Their role players step up, and they make plays. We have to be able to defend. They pushed us out of our comfort zone. We have kids that are experienced. We’ve played tough competition, hopefully that gets us ready.”

If the sectional semifinal was an indication, the Stars couldn’t be more ready. They demolished Floyd Central 61-16 on Monday night, a noteworthy score considering the Highlanders were coming off an impressive 55-50 win over Jennings. But score comparisons mean nothing. Neither does history. There’s already pressure on the head that wears the crown.

“It’s a little nerve racking,” BNL coach Carlee Kern said. “We just need to do what we know to do. We just have to play.”

The winner will advance to the two-game regional at Columbus North and face the victor from the sectional at Evansville (either Evansville Reitz or Castle) in the second semifinal. The first semifinal will feature No.2 Franklin and either Columbus East or East Central.

Last meeting: On Nov. 30 at Jennings, the Stars rolled to a 50-34 triumph. Chloe Spreen had 19 points and Karsyn Norman totaled 17. Juliann Woodard had 8 points and 14 rebounds while Alivia Elmore had 12 points for the Panthers.

Game notes: BNL has won 22 straight games in the series. The Stars have won 10 straight sectional titles and 32 consecutive sectional games, including last year’s 55-51 win over Jennings in the sectional final at New Albany.