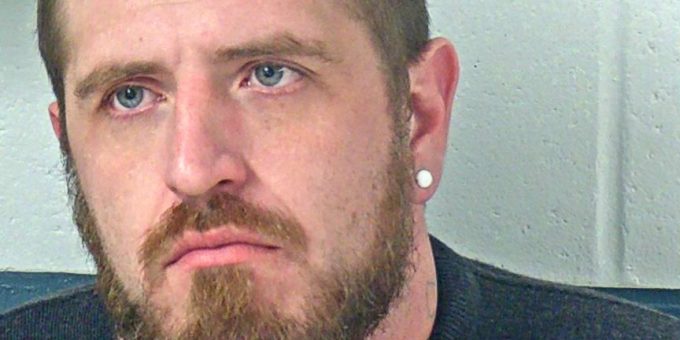 BEDFORD – A Williams man was arrested on Friday after he attempted to fraud a financial institution of money.

Bedford Police officers were alerted at 12:24 p.m. to respond to Hoosier Hills Credit Union on Lincoln Avenue after a report from the bank manager that 33-year-old Devin Downham had attempted to open an account using a stolen check.

The bank manager told police the check appeared to have been “written over which initially alerted them something was wrong”. They then realized the person who owned the check had an account at Hoosier Hills Credit Union and they called the man who wrote the check. The manager learned the account holder had written the check to Tieman Tires in Mitchell and did not know Devin Downham. The check was written in the sum of $1,767.75 for the payment of tractor tires and had sent the check to Tieman Tires via mail.

But before the bank manager could speak to Downham he fled the bank with the stolen check.

Before fleeing, Downham provided a bank employee with his Florida driver’s license, a phone number, and address. Downham was also captured on bank security video entering and leaving the bank in a red SUV. An officer stopped Downham’s vehicle at 13th and L streets. Police located Downham on the south side of the Hauck House in the alley and he was detained on charges of theft, fraud, forgery, possession of meth, and unlawful possession of a syringe.

Downham told police he got the check from a friend’s wife. That friend was currently in jail and the friend’s wife had written Downham’s name on it so he could cash it for her.

Downham told police the check was in a trash bag on the front floorboard of his truck.

Officers located the check along with several additional pieces of mail from different addresses inside Lawrence County but outside of the city limits.

The mail was collected and given to the Lawrence County Sheriff’s Department Detective Division. The US postal inspector in Indianapolis was also alerted.