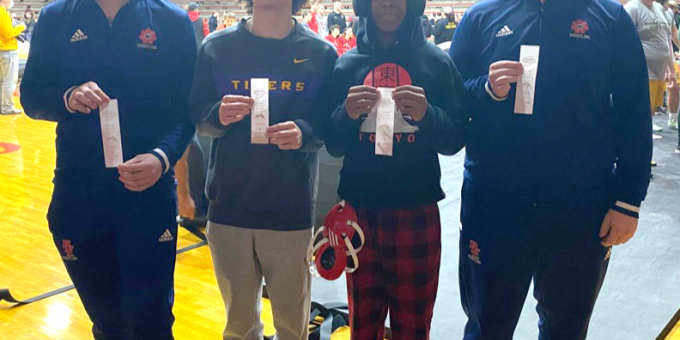 BEDFORD – One and done takes on a whole different meaning in the IHSAA regional. Win one or be done is more accurate.

Four athletes from Bedford North Lawrence will battle for an invitation to the semistate when they compete in the second stage of the state tournament series at Bloomington South on Saturday. The top four in each weight class will advance to the semistate in Evansville on Feb. 12.

With only eight wrestlers in each division, the math is simple. Win once to reach the final four and move on. Lose the opener, and go home.

BNL senior Gunner Connaughton will make a return regional appearance at 195 pounds after qualifying last season, and he faces a rematch against a familiar foe. Connaughton (15-5 after finishing third in the sectional at Southridge) will meet Owen Valley’s Eli Hinshaw (29-6) in the first round. Hinshaw pinned Connaughton in 32 seconds during a regular-season clash last year, then pinned Connaughton again in 1:31 in the regional confrontation.

“We’ve not seen this wrestler this year, and I’ve seen a lot of growth out of Gunner since last season,” BNL coach Chris Branam said. “I think if Gunner goes out and attacks right off the whistle, while still keeping his defense strong, he’ll be able to find ways to capitalize.”

BNL’s other three qualifiers will make their regional debuts.

“Patrell has shown himself to be a fighter all season,” Branam said. “Three times this year, he took a loss and fought back to get as high on the podium as he could. The key for him will be to stay in good position and bring that fight.

“Jorj has seen this opponent earlier this season, but I believe Jorj has vastly improved over the course of this season. Jorj needs to keep the pressure on this kid, lots of aggression to force this wrestler into bad positions. Junior has shown himself to be no respecter of persons this year. He will go out and scrap with anyone regardless of age or background. Junior needs to go out with that mentality and tie this guy up. When Junior controls the ties, he has opportunities to score.”

The regional will feature qualifiers from the sectionals at Southridge and Bloomington North. The semistate will include competition from three other regionals, with the top four from that tournament advancing to the state finals.