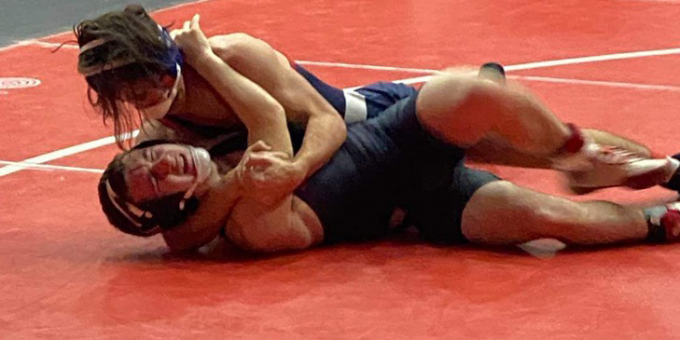 BNL freshman Patrell Childs (106 pounds), sophomore Jorj Filler (120), senior Gunner Connaughton (195) and freshman Junior Arellano (285) all qualified for the second stage of the state tournament series. The top four in each weight class moved on the regional at Bloomington South on Feb. 5.

“I’m very happy with the level of wrestling I saw out of everyone,” BNL coach Chris Branam said. “The improvements this year were marked.”

Childs (16-10) won three matches while finishing third. He opened with a major decision over Jasper’s Caleb Patterson (15-5 final score). After falling to Tell City’s Walter Hagedorn in the semifinal, he came through the consolation with victories over Pike Central’s Kylee Baker (pin in 57 seconds) and Patterson (pinning him in 1:15).

Filler (32-10) went the same route to third place, starting with a pin of North Knox’s Madison Dolkey (2:40). After suffering a loss to Tell City’s Brayden Lain in the semifinal, he bounced back to beat Forest Park’s Elijah Brosmer (pin in 1:44) and Southridge’s Jayden Fogle (major decision by a 19-9 count).

Connaughton (15-5) had a similar day to grab third place. He pinned Forest Park’s Austin Hoppenjans in 1:29 in the quarterfinal, then dropped a close 3-2 decision to Southridge’s Colton Obermeier in the semifinal. Connaughton recovered to pin Jasper’s Hunter Kippenbrock (1:43) and then was awarded third place when Hoppenjans had to withdraw with a medical issue.

Arellano (22-11) also finished third with three wins. He opened with a pin of New Albany’s James Hoffman (2:44), then fell to North Knox’s Beau Noland. Arellano bounced back to deck Southridge’s Zeke Valenciano in 3:25, then hammered down Floyd Central’s Jacob Lang in 1:34.

“Gunner bounced back after a tough semifinal loss to get himself third. Junior has shown a ton of poise for such a young man at a weight class often filled with upperclassmen.”