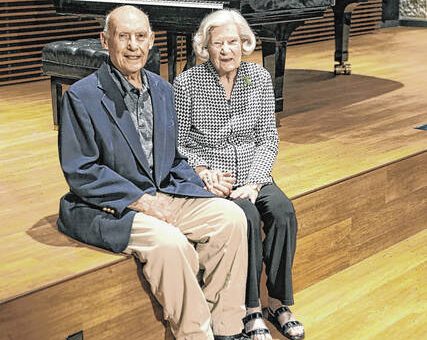 COLUMBUS – Governor Eric Holcomb has awarded Columbus philanthropists Bob and Helen Haddad with the Sagamore of the Wabash award.

They each have been given their own award for their wide-ranging service. Both are 89 years old.

According to The Republic, the couple is known for their extensive support of everything from the Columbus Indiana Philharmonic to the local Harrison Lake Country Club to Indianapolis’ Riley Hospital for Children.

Most recently, the husband-and-wife pair were in the limelight for making the $2.5 million, 100-seat Philharmonic venue and refurbished office space known as Helen Haddad Hall a reality at 315 Franklin St. in downtown Columbus. David Bowden, the orchestra’s longtime artistic director, has said more than once that few orchestras nationwide have such a space.

The Haddads’ gift, made in two parts, included an outright gift of $500,000 seeking an additional $500,000 in matching funds. Members of the community stepped up and met that challenge within six weeks.

Plus, several years ago, the couple donated the building that houses Helen Haddad Hall.

The couple moved to Columbus in 1972, where Bob started Columbus Container Inc. He eventually grew the business to several other facilities before his retirement. Those locations included Seymour, Edinburgh, Indianapolis, Jasper, and Flora, Illinois.

The Sagamore of the Wabash is the highest honor that the Governor of Indiana bestows. The award was created during the term of Governor Ralph Gates, who served from 1945 to 1949. According to the state website, the term “sagamore” was used by the Native American tribes of the northeastern United States to describe a lesser chief among the tribe to whom the chief would look for wisdom and advice.