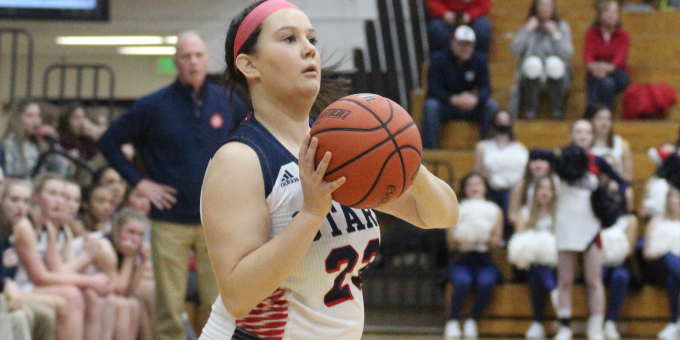 BEDFORD – Spurred by the celebration of Senior Night and the two-year thirst for revenge, Bedford North Lawrence will start the final week of the regular season with a snarl and a tear. That’s quite a mix of emotion.

The No.4 Stars will bid farewell to their three-player senior class, inserting them all into the starting lineup following the bittersweet pregame festivities and introductions, then seek vengeance for a 2020 loss when they battle Salem on Tuesday night.

After departing seniors Carlee Kern, Ella Turner and Hadley Teague take their final bows on the home court, BNL will look to declaw the Lions (10-8) and avenge a 69-58 road setback the last time these team collided. That Salem victory propelled the Lions all the way to the Class 3A state final.

BNL (18-2) hasn’t forgotten, even though the initial rematch was wiped out by virus protocols and the lack of a rescheduling window last season. And the Stars need to maintain momentum, plus build on that wave to crest for the postseason, with a quality performance and triumph.

”Everybody still remembers that a little bit,” BNL coach Jeff Allen said. “We’ll have a little edge to us, that we want to make sure it doesn’t happen again. The kids will be prepared to play.”

Some of the key players still remain from the last clash. The Lions will feature seniors Natalie Noel (a Maryville recruit averaging 15 points per game) and senior Abigail Ratts (also totaling 15 per game), a terrific forward combo who played key roles in the win over BNL. Ratts came off the bench that night to score 15 points.

“Both those kids are really nice high school players, two kids we’ll give a lot of attention on the defensive side,” Allen said.

“We have two of the top 25 players in southern Indiana,” Salem coach Jerry Hickey said. “We’re a good shooting team, that’s one of our big strengths. And that’s why we’ve struggled recently. We’ve not been shooting well.”

The Lions have lost two straight, and four of six, and they’ve scored 47 or fewer points five times during that skid. They need a signature win, and this would qualify, to change their mindset.

“I thought the success we’ve had in the past would carry us coming into the season, but it’s gone the other way,” Hickey said. “We’re stuck in a little rut. It seems like we’re waiting for something bad to happen to us. We kind of have a defeatist attitude. It’s like we think we’re playing well, but that will change soon.”

BNL will counter with its usual stars. Sophomore forward Chloe Spreen (16.3 points and 6.2 rebounds) and junior guard Karsyn Norman (14.6) will face a Salem zone that forced some key turnovers (and BNL hit only 6 of 22 treys) the last time.

“BNL is a team that can shoot the ball,:” Hickey said. “We know how talented Chloe is, and I had a chance to coach Karsyn this summer. She was the leader, the one that really stood out. And they have such good complementary players. The supporting cast for BNL has been so strong. They’re a threat. You have to guard them at all times.”

“We’ll have to make shots,” Allen said. “I’m excited about that, because that’s something we need to work on. We need to be able to move the basketball and make shots. Playing them at this time of year is a really good thing for us. They’re a good basketball team, so we’ll have to play well. It will help us get prepared for the sectional.”

BNL, and the rest of the state, learned its sectional fate on Sunday night. But there is unfinished business this week, starting with the home finale.

“There will be emotions involved,” Allen said. “Hopefully we get off to a good start. I feel like I owe it to those seniors. They dedicate a lot of time. So it’s something I can do for them, to start them and honor them for their last home game.”

Last meeting: In 2020 at Salem, the Lions stunned the Stars 69-58. Karly Sweeney had 18 points for Salem, while Madison Webb totaled 20 points for BNL.

Game notes: Salem advanced to the 2020 Class 3A state final, falling to NorthWood. Last year’s game between the teams was cancelled by virus protocols.