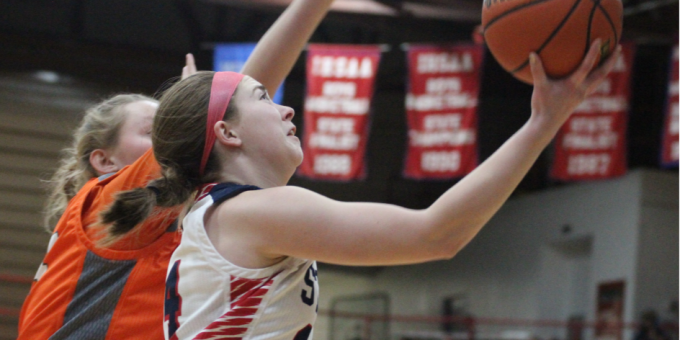 BEDFORD – Beneath the gruff, drill sergeant exterior and that laser-beam coach scowl, Bedford North Lawrence’s Jeff Allen has been accused of being soft and emotional. “All goo on the inside” those close to him will say. He views his team as more daughters, almost equal to the two he raised, and he’s the father figure who will bark at one moment and hug the next.

That’s why seniors are special in his eyes. They’ve gone through four years in the program he’s run for eight seasons, longer when adding his time as an assistant, and he loses part of his family – and piece of his heart – when they graduate. And BNL is about to bid farewell to a trio that has earned high praise from their head coach.

Carlee Kern, Ella Turner and Hadley Teague are vastly diverse in terms of roles, but they have one characteristic in common. “High character kids,” Allen said. And that’s the highest compliment he disperses.

BNL’s senior trio will take their final bows in BNL Fieldhouse on Tuesday night when the No.4 Stars welcome Salem for the home finale. They’ll endure the emotional midcourt festivities, with their parents at their side as they are blanketed in deserved applause from the loyal, loving fans that embrace those who don the uniform. They’ll glance up at their banners hanging above the court, wondering where the time went.

“It’s kind of crazy, and really sad,” Teague said. “I remember my freshman year, looking up and seeing the Jorie (Allen, the 2019 Miss Basketball) poster up there, and I couldn’t believe it went as fast as it did. I didn’t think it would go this fast. You have game after game, and it all makes it go by so much faster.”

Who are they? Kern is the three-sport standout who never rests, a starter who stepped into a leadership role. Turner is a key reserve, the first person off the bench. Teague is the consummate teammate who toils in practice, gets little reward of playing time, but cheers her friends and pushes them to greatness. Those are all critical components to a special team.

“The thing they have in common is they are all high-character kids,” Allen said. “That’s the one thing I’m blessed with here, the type of character kids we have to coach. Talent varies from player to player, but most of the kids here are really good kids. That’s a tribute to the people, the parents, the community.

“Carlee has done an amazing job. We’ve asked her to do a lot of different things. The one thing that has surprised me is she’s been able to score a lot, really help us at times. Ella has had a great year, stepping into a varsity setting without a lot of experience, and she’s been crucial at times. Hadley has been a great practice player, role player, teammate. I’m happy to have had the opportunity to coach them. They’ll be missed.”

What has made this BNL team special? These Stars were not expected to be 18-2, at one time ranked No.1 in the state, when the season started. Yes they have stars, and talent, and other measurable qualities, but the unseen tangible of chemistry has been BNL’s key. All three seniors pointed to that element – “When you have great chemistry, it makes everything better,” Teague said – as the foundation of success.

“It’s the chemistry of the girls,” Turner said. “We all want to play for each other, instead of it being a one-man show. We all want each other to win, we lift each other up when someone is down.”

“Just the friendships I’ve made,” Kern said. “I’m really close with the whole team, we’ve grown up together, and I will miss that. The chemistry has been insane.”

All three upperclassmen pointed to the same moment, the 54-51 comeback win at North Central on Nov. 19, when they knew these Stars were destined for special status. They’ve all had their highlights since. Kern has been huge, contributing 6.4 points and 3.8 rebounds, and she’s been asked to guard the opposing center, usually giving up four or more inches in height but nothing in heart.

“It’s a little tough,” Kern said with a smile. “You’re like ‘Holy crap, she’s really huge.’ But it’s my job and I know I need to do it well. I’m always willing to do it, and I like a good challenge.”

Turner is coming off her best performance, 8 points and 8 rebounds against Jasper, although her task is usually defending and rebounding. Teague has appeared in 9 games, scoring 6 total points, but she measures her effort in other ways.

“Watching my team play is awesome,” Teague said. “It’s like, oh my gosh, I help one of the best teams in the state be where they are, by being at practice and helping them better themselves. When I do get minutes, my teams cheers me on. It’s how we play as a team. We don’t play for ourselves, we play for each other, so we all work together as one.”

One of the hugs they will receive during the pregame celebration will come from their head coach. Allen will be like the proud father giving away the bride. Soon enough, they will belong to someone else, going on to college or careers, heading into life with memories of wearing the BNL jersey with pride and distinction.

“He’s like a father figure, kind of a drill sergeant,” Kern said with a smile. “He’ll yell at me, but the next minute he’s giving me a hug and telling me it’s OK. I know he’ll never put me down.”

“He wants the best for you, he expects a lot out of you,” Turner said. “I wouldn’t be the same player without him pushing me and making me better.” And Teague also used the Dad description. ”I’ve always looked up to him and wanted to make him proud,” she said. “He has a tough love.”

Allen laughed quite loudly when told his seniors were given the opportunity to describe him. “There’s probably a lot of options on that one,” he said. But then that fits into the family narrative he has built in the program.

“Being a father, I’m touched by that,” he said. “That’s what I want to be. I look at all these girls as my daughters. I’ve coached my daughters and it’s one of the enjoyments I get from coaching. I’m going to coach as long as I’m having fun. With girls like those three seniors, I’m having a lot of fun.

“These kids legitimately care about each other, and they care about Lady Stars basketball. That’s a culture we’ve instilled. They understand it‘s a family atmosphere. Work has to be put in and a lot is expected, but we have a lot of fun, too.”

BNL basketball is a sisterhood. The seniors will be life members of a unique sorority.

“It’s been great,” Kern said. “I feel like all of these girls are my sisters. It’s been really special.”