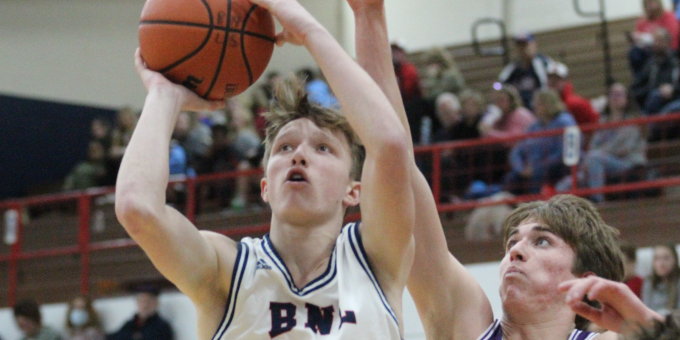 BEDFORD – Describing basketball as a “rock fight” or “boxing match” immediately divulges the poetry and artistic value of what transpired on the court. And those accurate descriptions came from the coaches on opposite ends. They saw the same thing from different angles – something brutal.

The common theme from those metaphors is easily identified. No matter how many stones are cast, no matter how many punches are thrown, if nothing hits the target, no damage is done. And that, making a long story much shorter, was Bedford North Lawrence’s offense on Friday night. That paradigm never changed, neither did the outcome.

Seymour dodged all the rocks, ducked under the punches, and decked the Stars 36-26. Eli Meyer scored 10 points as the Owls (8-4, 4-1 in the Hoosier Hills Conference) took another step toward a league title they have never won. The Stars (5-6, 1-2) never led and failed to figure out the key to solving Seymour’s defensive lockdown.

BNL’s suffered through the Jimi Hendrix experience – a purple haze. The Stars were a miserable 9 of 36 from the floor (including 2 of 16 from distance) and missed nine consecutive shots during two different spans. Until the final fling dropped at the buzzer, they were going to match the lowest point total in program history. Not exactly the record anyone wants to claim.

“You can’t win if you can’t score,” BNL coach Jeff Hein summarized. And that’s exactly right. Other than a brief surge in the third quarter, the Stars were reduced to a frustrating standstill. No driving lanes, no open gaps to the rim, no perimeter attack.

“Their defense was excellent,” Hein said. “They took us out of what we try to do. We struggled to score.

“Our shooting was atrocious. A lot had to do with them, they forced us out on the floor, and a lot of those shots had no chance of going in. They completely got us out of sync. We have to do a better job of staying composed. There were a lot of debatable shots. We got behind and got impatient.”

Seymour never trailed, with Meyer dropping three first-quarter jumpers for an 11-5 advantage. During BNL’s two wins over the Owls last season, Seymour was silenced to single digits in both first halves. This time, BNL was limited to 7 points in two quarters. The Stars missed their final 9 shots of the half, which ended with Seymour owning an 18-7 advantage. And that, because of the pace, seemed like 20.

“It was something that was a huge concern,” Seymour coach Kirk Manns said. “We didn’t want to fall behind. We knew, if we did, the game would come to a standstill. We were able to get out early, we had Bedford playing from behind. That was the difference.

“This game was still a rock fight. You have to understand it will be that way, you have to grind it out.”

Despite the struggles, BNL clawed back. Colton Staggs dropped a baseline drifter, Trace Rynders penetrated for a layup, Kaedyn Bennett popped a transition 3-pointer, and Kole Bailey got loose for a layup on a beautiful Rynders pass as BNL surged within 22-18. Staggs dropped two free throws that cut the deficit to a single possession, 24-21 with 5:02 left.

But that was as close as BNL could climb. Casey Regruth made four free throws, Charlie Longmeier discarded a defender for a drive through the paint, Bret Perry converted twice at the line, and Marcus Brooks scored on a breakout that pushed Seymour in front by double digits once again. The BNL low-output record of 23 (set against Loogootee three decades ago) was threatened until Bailey’s late trey.

“We expended so much energy,” Hein said of the comeback. “And every mistake gets magnified in a game like that. It was 15-round boxing match, and we lost the first seven and a half rounds baldly. We got punched in the mouth and were back on our heels. In the second half we came out fighting, but it was too late. We have to do that from the beginning. We couldn’t get a lead. We got behind. I bet we played defense for 24 minutes.”

Seymour played defense like stubborn parents – saying ‘yes’ to nothing. The Owls took away BNL’s ability to drive and cause destruction. TheIr positioning and help were flawless.

”Staggs and (Colten) Leach are really good guards,” Manns said. “They make good decisions, they’re good with the ball, they’re hard to deal with. We had to control the penetration. If we did that, the other things fall into place. We did a pretty good job.”

Leach paced the Stars with 7 points, a number matched by Bailey off the bench, and grabbed 11 rebounds. Staggs totaled 6 points. BNL had only 5 turnovers and won the rebounding battle, but those stats were blurred by the lack of offensive highlights and focus.

“We did all those things well,” Hein said. “It comes down to one thing. We have to find ways to score. We don’t have balance, we don’t have enough threats out there right now. Hard to win in the game of basketball if you don’t score. Yet we still had a chance in the fourth quarter.”

Landon Fritsch had 8 points for Seymour, which set up a league showdown with Floyd Central next week.

BNL will return to action against Edgewood on Saturday. The Stars also added a home game with Evansville Harrison (scheduled for Jan. 29) to replace the cancelled contest with Evansville Reitz.